For health reasons, I’ve been doing almost all the grocery shopping online.

It isn’t more convenient, because the shopping process involves a fair amount of following along as the shopper ignores one’s fallback instructions and either does or doesn’t text for instructions. (I think of it as “the world’s worst video game”.) Unlike in-person, I don’t get much control over timing, as the shopping will happen some random time up to 3 hours before the delivery time. And the delivery window is also only notional; I suspect that the ratio of would-be shoppers to customers has gone down and as a result my often sizable orders with good tips get grabbed early. Indeed, they are often delivered well before the window I set, which can also make for conflict with online meetings and the like.

And it is expensive: I figure between the app’s markup over the store prices, and the tip, I’m paying at least 25% more than if I went myself.

And it’s frustrating when some types of things that I think I could find in person are not offered on the app. [Yes, there’s a ‘special requests’ mechanism, but it is a bit of a pain.] And it’s also frustrating when stuff theoretically on the app turn out to be not available, although I imagine that this likely would be equally frustrating in person too, given supply chain issues.

Today, however, I experienced a new online grocery shopping problem–or at least one new to me.

Amidst an order with several items, I asked for this: 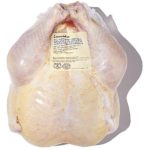 I got most of what I asked for, but in addition to the chicken I asked for (or meant to ask for?), I also got (and got duly charged for), this:

Yes, I got FIVE chickens. Five. I didn’t save a copy of the original order (I sure will from now on) so I can’t prove I didn’t do something to cause the app to record an order for a record number of chickens, although I can’t see how I could have done that.

So now I have five chickens. Guess I know what we’re eating this week. And next.

Posted on September 16, 2020 by Michael Froomkin

Actual real I swear transcript of phone call a minute ago:

Me (since this is 2nd such call in five minutes): This is tiresome.

sigh Maybe not even new?

Posted on September 16, 2020 by Michael Froomkin

First it was fake small-batch bourbon, then fake craft beer, and now we have to look out for the Ghost Kitchens:

When a virtual restaurant shows up in a delivery app, it may be indistinguishable from a brick-and-mortar pizza shop or mom-and-pop noodle joint, but it’s fundamentally different. The virtual restaurant is optimized for generating orders online and handing them to delivery drivers, and the name that’s advertised may not exist outside of the internet. Additionally, the menu and branding might have been created by a tech firm.

Sometimes a restaurant may advertise multiple menus under different names online but cook all the food out of one kitchen. That’s what was happening in April, when the story of one Philadelphia woman’s experience went viral. She had ordered from Pasqually’s Pizza & Wings on Grubhub, thinking she was supporting a local independent restaurant but then realized it was owned by and operated out of her local Chuck E. Cheese.

Posted in Food and Drink, Shopping | Leave a comment

Pixel One Battery Replacement is Possible!

Posted on February 24, 2019 by Michael Froomkin

One of the more annoying things about the Pixel 1, aside from the Google Assistant that I had to disable on privacy grounds, is that it’s a sealed case — so no way to replace the battery. This started to become an issue a few weeks ago. It wasn’t just that battery life had gotten noticeably worse, you expect that after a couple of years, it was that the battery would go from c.20% to dead without any warning.

It turns out, however, that there’s an entire chain of Google-certified phone repair joints with the silly name of ubreakifix that will replace the battery in a Pixel in a couple of hours for about $80. That’s a lot cheaper than buying a new phone. I was afraid the thing would have horrible scars from being pried open, but no. “We have tools” the tech told me smugly, and it indeed there’s no sign the case has been opened, but battery life is 50% greater than it was last week.

So now I’m likely good until Google orpahans the phone, which could come as soon as in October, at which point supposedly they’ll stop doing patches for it. The idea of course is to make me buy a new phone. Sadly, it will probably work. I hope the Pixel 4 is better than the Pixel 3 or I may to switch to Samsung.

Posted on August 4, 2018 by Michael Froomkin

Circumstances led me to go to Dadeland Mall this Saturday evening. It was to be the first time in many years that I set foot in what was once (and for all I know may still be) the most profitable mall per square foot in the US of A.

I expected that on a Saturday night things would be nice and peaceful. Boy was I wrong.

When I arrived at about 8:30pm, the parking lot was jammed. It took me maybe 15 minutes to find a parking space, although some of that was just spent idling in a jam caused by a big pickup truck that was blocking the lane as it waited for someone else to exit a spot and then slowly eased into it.

I did find a spot eventually, but once in the actual Mall it became obvious that I’d parked on exactly the wrong end of it. The walk from one end to the other allows me to report first, that there are a lot more high-end shops than I remember from when I used to shop there occasionally lo these may years ago and, second, that the Mall was jammed with people.

Who goes to Dadeland on a Saturday night? There were a number of young people, but they were outnumbered by adults. I have no idea why that is: Is the economy actually booming? Is it something about the back-to-school tax holiday this week (but that only applies to school supplies)? Is it the air conditioning? Is it tourists? Is there nothing better to do in Miami on a Saturday night in August?

Anyway, I ran my errand, and retraced my steps. Getting out was easier than getting in.