Posted on December 25, 2010 by Michael Froomkin

This is for Benjamin:

Something Went Badly Wrong in the Late 1970s

Posted on December 24, 2010 by Michael Froomkin

The toy du jour is Google’s new ngram — a way to graph the frequency of words or phrases in 10% of the books published in the US.  Here’s an ngram for “due process”.

Posted on December 24, 2010 by Michael Froomkin

It’s somewhat like ignoring the vegetable drawer of your fridge for a year, then opening it to find a bunch of very grateful sentient tomatoes busily working on their third opera.

from The Post That Cannot Possibly Go Wrong.  Which is worth reading for lots of other reasons.

Posted on December 23, 2010 by Michael Froomkin

Somehow, my Firefox syncs stopped syncing.  I think it had something to do with updating the plugin on one machine but not another.  Anyway, in my attempts to fix this, I got to a point where the secret key was not the same on all the machines.  But when I tried to change it, the change key button was greyed out and I couldn’t type over the (wrong) key.  As a public service, I’m reprinting the solution, found — most obscurely — on a Firefox help thread entitled The article mentions a “secret phrase” but I got a “Firefox Sync Key” instead. Is this the same thing?:

After upgrading to FF 3.6 (now at 3.6.12) , I began getting an error message “! Error while signing in. Please try again” and when I clicked on it, the explanation “Sync encountered an error while connecting: Wrong Sync Key” appeared along with a link to “Preferences” – clicking on this link took me to Sync Preferences > Manage Account. Click on the tab “Sync Key” and the key on that computer is shown – but, you can’t change the Sync Key there (except by generating a new one, which resets the entire account with a new random-generated key, which is not helpful as your other computers can’t generate the same key). How to get all three computers on the same Key? It turns out you have to print the sync key from one of your computers, then trigger the error message on each other computer having a different key. On each other computer, click on Preferences > Manage Account as before, but don’t click on the Sync Key tab; instead click on “Connect” next to your account name. Now you will receive another error message saying “Wrong Sync Key” in red – and beside that, links to “update” and “reset”. Click “update.” (“Reset” merely sends you to generate a new random key.) “Update” takes you to a text box with a blank inviting you to enter a new key: enter the one you copied from the other computer. This box is pre-configured to accept only an alpha-numeric key in blocks of 1-5-5-5-5-5 characters – you cannot enter your choice of text, only a key already generated on another computer. When finished, you should get the message “Your sync keywas successfully changed!” None of this is from FF Help; just trial and error.

Got that?  Here it is in an easier-to-read format:

UPDATE (12/25): While the above does in fact allow you to get all your computers talking to each other again, it doesn’t fully solve the problem: sync will still intermittently fail to connect after working perfectly well. And then later it will work again. This seems to be a bug relating to version 1.6 on the server end. And from the look of things, I don’t think I’m going to be out of the woods until Firefox 4.0 comes out… I advise sticking with version 1.5 on all your machines until this gets worked out. (Note that it’s fairly complex to downgrade from 1.6 to 1.5 as they use different encryption or storage methods. I think you would have to unload the plugin from all the machines, then start a new account with the 1.5 data; otherwise you will end up with a mess, either missing or duplicated bookmarks.)

Maybe it is time to go back to the dead?

Posted on December 22, 2010 by Michael Froomkin

No, not what you think.   Something new — this: 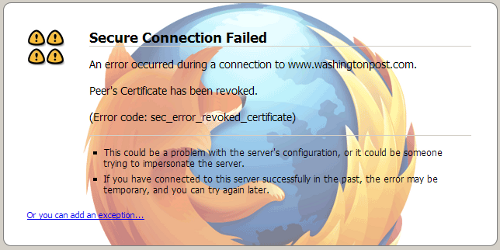 Posted on December 22, 2010 by Michael Froomkin

The Miami Herald web page reports the (rather important) story four items below Ear-biting monkey caught after disrupting dinner, but it seems that the Clerk of Courts Harvey Ruvin has certified the petitions seeking a Recall vote on Miami-Dade County Mayor Carlos Alvarez.

I get a vote in this one, and I’m thinking I’ll vote “no”. I’m open to persuasion, but the whole recall idea here seems to me to be misguided, and largely motivated by the personal pique of a local millionaire. Don’t get me wrong — there are plenty of local politicians I’d happily see recalled, including a nice big chunk of the County Commission. And, happily, several recall petitions are in the works for some of them too. I simply don’t see the case for recalling Alvarez. While not a perfect county Mayor, Alvarez has been considerably better than average. He’s probably a B, on a good day B+, Mayor, in a town where the C- has been far more common and the F not unheard of.

Plus, if we lose Alvarez what do we get? Does the Commission get to appoint his successor? The Herald says, “Under current law, if the mayor is recalled and the commission holds a special election for a new mayor, there is no provision allowing commissioners to appoint an interim mayor.” But what the Herald didn’t say is that if the Commission doesn’t call a special election, they can just appoint a new Mayor. Here’s the relevant text from the Charter:

So they don’t have to have an election to replace Alvarez.  But a Mayor appointed by the current Commission likely would be awful.

I  just don’t see the case for this one.