Posted on November 15, 2020 by Michael Froomkin

Daniel Ravicher started and runs a successful entrepreneurship clinic (the “Startup Practicum”) at the University of Miami School of Law.  His office happens to be in the same pod as mine, so back in the days when people saw people I would see him from time to time. Like an increasing number of the people who teach students in law these days, Ravicher is not a tenured member of the faculty, and indeed was not hired for his scholarship. Instead he was hired for his skills, and has a term renewable contract.

He’s recently taken to social media – and even Fox TV – to claim he’s been fired for his pro-Trump tweets and other speech, or is about to be, or may not have his contract renewed when it expires. As far as I have been able to ascertain, at least the first two of these claims are simply false. The fate of the third lies well in the future.

While Ravicher has behaved badly – lying about your employer counts as behaving badly in my book – the University has, with one exception (discussed rather far below) [Update: as described in more detail below, according to the Dean, even this wasn’t anywhere as bad as the story that had been going around], behaved quite well, and held, so far at least, to its fundamental commitments to academic freedom.

But first, some lengthy background.

The University of Miami, which has substantial powers to dictate rules regarding the terms of faculty employment to the law school, has an extensive Faculty Manual, which describes various rights and duty of the faculty. As regards freedom of speech and academic freedom, the Manual makes no distinction between tenured and non-tenured faculty, although its provisions do not in many cases apply to “staff” who are hired in a different manner and in some cases have fewer rights against dismissal for various reasons.

The UM Faculty Manual provides in § C.8 that

“Faculty members shall have full freedom of expression as teachers, researchers, scholars, and/or artists; this includes freedom to present their work, to advocate solutions to human problems, and to criticize existing institutions. This freedom does not abrogate faculty members’ responsibility to perform their academic duties or obligations they may have assumed in accepting support for research.  Research activities are also subject to University policies such as those on patents, copyrights, and inventions as set forth in the Faculty Manual.

“Faculty members shall have freedom in the classroom in discussing the subject but should avoid persistently introducing material that has no relation to that subject.

That is a nice statement, and a pretty absolute rule.  But wait, there’s more. END_OF_DOCUMENT_TOKEN_TO_BE_REPLACED

Posted on October 7, 2020 by Michael Froomkin

Taxprof Blog, Miami’s Tony Varona Is Fifth Law School Dean To Give At Least $100,000 To Students.

I never wanted to be a Dean–too many meetings. Being a Dean during a pandemic must be truly horrible, so I’m very grateful that we have one who seems to be doing such a great job under such trying circumstances.

Posted on September 21, 2020 by Michael Froomkin 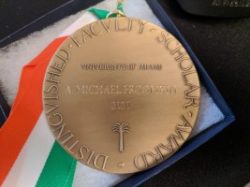 It’s not too late to register for the (Zoomed) Faculty Senate awards ceremony this afternoon at 5pm. (It was supposed to be in-person last semester, but it got postponed to all-Zoom this semester.)

As the recipient of this year’s Faculty Scholarship award, I’ve been invited to give a 10 minute talk related to my work, that I’m calling “Disruptive Technology and the Law”.

An Invitation From the Faculty Senate

Posted on September 8, 2020 by Michael Froomkin

On Wednesday, the University of Miami in an email announced “financial mitigation actions,” effective immediately, to reduce expenses across the university, including its healthcare system, UHealth.

“Today’s highly uncertain economic environment poses serious financial implications for our University, as well as for our health care system, UHealth,” the email read. “These are unprecedented times, which require significant measures.”

Those measures include a hiring freeze, a postponement of merit-based pay raises, significantly reduced or eliminated non-essential, non-salary expenses, delaying planned construction projects until 2022, tapping into unrestricted donor funds and expanding its freshman class from about 2,200 to 2,350.

That this University, much like all others, faces financial problems is a given: From a financial flows point of view we’re a large hospital with a smallish university attached. And hospitals are being hammered two ways: large, unexpected, COVID-19-related costs, and a collapse of other sorts of revenue as patients put off elective and even necessary surgery. So it seems likely we are in for it.

That said, is it realistic for the College to plan on a larger entering Freshman class? I worry that (sensible) people will still be avoiding crowds — and maybe everyone — in early Fall, and indeed until we have a reliable vaccine. And the most optimistic estimates I’ve seen for a reliable vaccine put FDA approval in early 2021; even then, production will doubtless take time also.

We Have Great Students

Posted on September 3, 2019 by Michael Froomkin 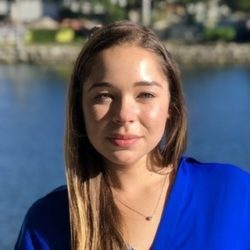 Well done! Now how about that paper you’re writing for me….