Song of the Year?

(Don’t click if you are sensitive to blurred-out digital hand gestures.)

Lifted from the Florida Bar News

Posted on December 4, 2019 by Michael Froomkin 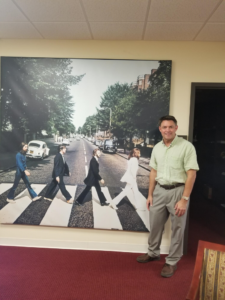 I did not know this:

When it comes to US 1 Radio/FM 104’s “Ed Scales Show” — a weekly trove of 60s, 70s, and 80s classic hits — there’s more than meets the ear. Most listeners know the eponymous host for his encyclopedic knowledge of all things Rolling Stones, Beatles, The Who, and a pantheon of guitar gods led by Jimi Hendrix and Eric Clapton. But what most listeners don’t know is that “Ed Scales” is Third District Court of Appeal Judge Edwin A. Scales III.

Of course, the show has a web page.

Posted in Kultcha, Law: Everything Else | Leave a comment

In Which I Take Google’s New “Poemportraits” for a Spin

Google has a new toy, created by Es Devlin called the PoemPortrait. Google, unpretentiously, calls it

An experiment at the boundaries of AI and human collaboration.

We are all invited to

Donate a word to become part of an ever evolving collective poem and create your own POEMPORTRAIT.

So I went to try it. It starts by asking you to “donate” a word. At that point, philistine that I am, all I could think of was Groucho Marx on the old game show ‘You Bet Your Life’, which always began with Groucho telling contestants that “Say the secret word and a duck will come down and give you 100 dollars.” (Shockingly, there seems to be no ringtone online with Grouch saying that. So here’s a video clip instead:)

Anyway, back to Google. I gave it my word (“Discourse” of course) and it announced that “An algorithm trained on over 20 million words of 19th century poetry is generating your unique POEMPORTRAIT.” I declined the offer to have my picture taken, and…voilà:

That discourse of the word,
Spellbind the corn, sighing and streaming.

It offered me a chance to save the ‘portrait’ so I did.  But this is how it came out: 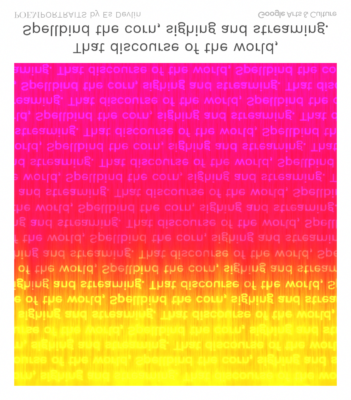 I’m reassured to see that AI’s too can be dyslexic.

When I Do It, It’s More Metaphorical

They have competitions and everything. According to the NYT and the trailer for the inevitable movie, it’s a form of girl power.

What does it mean when you have lost not only Taylor Swift but also Barbra Streisand:

One thing it means is a spike in voter registration.

Posted in 2018 Election, Kultcha, The Resistance | Leave a comment

Posted on October 1, 2018 by Michael Froomkin

Good stuff, but what we really need is someone like Lana del Ray to do an anti-Kavanaugh song. (And while this is quite something, it doesn’t count.)