This Ought to Move a Few Voters

“Men” from the Lincoln Project:

Show This to Your Cuban-American Friends

I wish every Cuban-American and Venezuelan-American in South Florida could see this video, “Trump is English for Castro“:

From the Lincoln Project of course. There’s an English-language version for the gringos.

While you are at it, read Waging Nonviolence‘s 10 things you need to know to stop a coup.

Like others, I approached the Biden-Trump Presidential ‘debate’ with multiple forms of dread. One source of gloom was the thought of having to listen to Trump for any extended period of time. The other was the fear that something bad could happen, changing what currently appears to be the favorable course of the ongoing election. Add in generalized reactions to 2020, and it was an effort to turn it on.

But I did. And it turns out that the debate was less awful in the ways I may have expected, and much more awful in a way I hadn’t been thinking about, an awfulness exacerbated by the bulk of the commentary after the fact.

Pundits of course want to address one of my expected sources of dread by analyzing whether this hour and a half moved the needle. And on the one hand the CNN instapoll suggests Trump “lost” bigly; on the other hand some people justly worry that Biden’s infelicity about his oil policy might come back to bite him in Texas — although no one has noted that all the oil giants other than Exxon, a stubborn outlier, have been busy diversifying like crazy into renewable energy because they can see the writing on the wall.

But the overwhelming trend among the commentators I happened to read was to celebrate how this debate was a sign of Trump’s (relative) restraint and thus made it much more the sort of debate needed by a healthy polity.

Others have already pushed back on this nonsense, but let me add my mite to the pile: this ‘debate’ was a disaster for the public sphere.

One of the candidates lied about reality, lied about his record, lied about his opponent’s record, and made allegations about his opponent’s supposed corruption that have support only in the deepest fever swamps where scraps of Russian disinfo get venerated as sacraments. We find ourselves in a world in which this sort of lying and slander is not met with instant and near-universal condemnation as an insult to our intelligence, and as an insult to the democratic underpinnings of our Republic. It is a world so deeply debased that we seem to have abandoned the very tools we would need — not least, ridicule — in order to claw our way back to the normalcy some commentators claim was achieved or approximated last night. I didn’t see that; I just saw rot.

If there is a Biden landslide, and also a decent Senatorial majority, and the election results are not then subjected to endless legal maneuvers of dubious moral legitimacy even if in some cases they might have some shreds of formal legality, then perhaps this will not matter. But note that we have three ifs and a perhaps before we get there.

Update: Just saw this fine piece by Paul Waldman in the WashPo. Here’s a taste:

If it were any other candidate, his party would be trying desperately to figure out whether it could replace him on the ticket, because someone so unhinged could only lead it to disaster. But because it’s Trump, everyone says, “Gee, he did pretty well!”

The phrase so often repeated in the early days of this administration — “This is not normal” — has faded away, an absurd understatement of our debased reality. “Normal” has no meaning in this era; it’s like saying “This isn’t the road to Flagstaff” when you’ve gotten so far off track that you just drove into the Arctic Ocean.

Posted in 2020 Election, Politics, The Media, Trump | Leave a comment

The Black Eyed Peas and Jennifer Hudson give Joe Biden the full Obama video treatment in this video entitled “The Love“:

Looks like maybe the closing pitch of the Biden campaign will be its own restorative version of hope, although it’s notable that the slogan in both this and the other day’s “Go From There” video is “Love”. 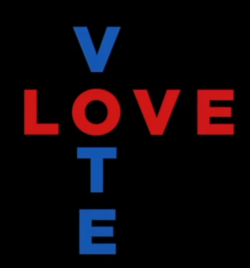 My father, @MelBrooks, is 94. He has never made a political video. Until now. #MelBrooks4JoeBiden#BidenHarris#GrassrootsDemHQ pic.twitter.com/yQZhopSbNV

The new Biden ad has lovely visuals with an at least overtly positive message.