Yet another reason why 12 Bones in Asheville, NC, is one of the greatest BBQ places in the USA.

(Spotted via the great Slacktivist’s TMI, barbecue and other people’s sex lives.)

DINOs — Democrats in Name Only — are a resurgent species in Florida. DownWithTyranny!: The Tarnished Brand (Florida Episode) takes a look at their enablers:

Florida has 27 congressional seats. You might think from Nelson’s 55-52% statewide win or Obama’s 50-49% statewide win that the districts are a little over half Democratic and half Republican. But you’d be wrong. Self-serving local Democrats– the state Senator Debbie Wasserman Schultz being the worst ever– made deals with the Republicans to guarantee their own personal impregnable fiefdoms while guaranteeing the GOP the bulk of the state’s seats. Only 10 of the 27 seats are held by Democrats– obviously Wasserman Schultz being one of them– while Republicans hold 17 seats. Democratic districts have been drawn to produce gigantic Democratic wins– 87.6% for Obama in Frederica Wilson’s district, 82.6% in Alcee Hasting’s district, 71.1% in Corrine Brown’s district, 65.1% in Kathy’s Castor’s and Wasserman Schultz’s and 61.9% in Alan Grayson’s. Republican districts are drawn to be reliable– but not overflowing with votes. Republican victories in red districts are almost all in the 50%-60% range, only 3 getting up into the 60’s. That’s how you institutionalize non-accountability. And the state legislature is far worse.

Since we mentioned Wasserman Schultz, it’s worth mentioning that her insistence that no Democratic support go to anyone who challenges her Republican pal Ileana Ros-Lehtinen saw her friend win again this year– with only token opposition– while Obama won Ros-Lehtinen’s district with 53%. Debbie Wasserman Schultz– the GOP’s best friend in Florida, working as chairman of the DNC… again. She was key to handing lifelong Republican Patrick Murphy the Democratic nomination to take on Allen West and she’s the key figure in forcing Democrats in Florida to accept their old nemesis, lifelong Republican closet case Charlie Crist, as their next gubernatorial nominee.

It would be nice if the party would put up a more serious sacrificial candidate against IRL, but given her personal popularity and the size of her treasury, that would be a tactical move to distract and bleed her, not a very realistic hope; it is a pity the Florida Democratic party hasn’t the sense and the fortitude to do it, but that’s not the worst of its sins. On the other hand, the idea that I would be asked to swallow Chain Gang Charlie as the Democratic nominee for Governor is the sort of depressing prospect that takes all the energy out of the base.

Law.tm Got Hacked – Via DNS?

Starting sometimes late Friday, my personal web page at law.tm stopped returning my boring homepage, and instead produced this: 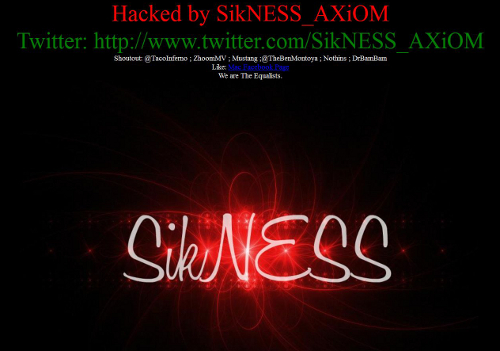 There was also a sound track, produced by embedding this youtube video of “Epic Anonymous Rap song – Hackers” several screens below the main image:

Naturally, I wasn’t pleased, even if I sort of liked the middle part of the rap. Why attack me of all people? I’m for net freedom. Worse, the hack was blocking my main personal email address. Still worse, I was no longer able to access the domain via sFTP or ssh — everything timed out — making debugging somewhat challenging.

Eventually I figured out another way to log into the host machine, and verified that none of the files on the law.tm domain, including the .htaccess file, had been changed. This removed the most likely vector of the attack. That left two possibilities: The first was the very unlikely possibility of some very subtle SQL injection attack plus a level of traffic so hosing the domain that I couldn’t get through to it via ssh; this seemed unlikely because if there really was some DDOS-like event in progress I would have heard about it from my hosting company, Dreamhost, when the machine crashed, plus the redirect of the web page shouldn’t have worked either.

That left option #2 as the main suspect: a hack of the DNS records. The DNS records for this particular domain are manged by a different company than my web host, and their help desk is (a) located in London and (b) only open 9-5 London time Monday-Friday, leaving me high and dry for the weekend (smart hackers?). Perhaps coincidentally, perhaps not, I had just renewed the law.tm domain a few days earlier with the Netnames registrar. So the only thing I could do while I waited for the Netnames help desk to wake up was try to satisfy myself that this really was a DNS hack. That proved harder than I would have liked: the DNS records seemed to show incorrect information, with web requests for the domain being pointed to 80.249.100.3 and mail being sent to 75.102.13.215, neither of which was right. But then again sometimes the nslookup would come up ok with the right data. It could have been a propagation issue but why then were my http requests, even when I cleared DNS cache, never going through to my real page? Maybe, I worried, I didn’t know how to read the DNS records properly.

So I struggled with the problem. On Saturday I felt hamstrung by unusually slow and poor helpdesk support by Dreamhost, who have been much better in most of my past interactions. This time they announced a new-to-me policy that we couldn’t communicate by phone, only email, as they want a written record of anything relating to a security issue. And it took hours to get the first email response. When they did swing into action Dreamhost also refused to confirm I was having a DNS issue, even though that would have gotten them fully off the hook, saying only that the results were “ambiguous” … although in retrospect, that may have been an accurate assessment … so maybe score one for them after all. Unfortunately other than giving me an automated scan that showed possible problems elsewhere in things I manage but not on law.tm or its users. they didn’t say anything helpful about what else the problem might be.

In the end, thankfully, the problem seemed to solve itself this afternoon. The dig and nslookup data changed for the better — no more signs of the 80.249.100.3 or 75.102.13.215 IP numbers. OpenDNS’s cache started reporting the right info in more and more locations. Pretty soon all was back to normal. I even got a few — so far, sadly just a few — of the test messages I’d sent myself. (If you emailed me Friday evening or later, send it again please).

So I’m now pretty sure it was a DNS issue. Whether netnames got hacked (it’s happened before), or whether it’s some particularly ham-handed activity in connection with the domain name renewal, I may never know. Everyone I used to know at Netnames, which has been taken over once or twice since I last looked, seems long gone.

Please Use Alternate Email to Reach Me (Resolved)

UPDATE 3pm 1/27/13: The problem, which I’ll say more about in my next post, seems to have been resolved. If you sent me any mail between Friday evening and early Sunday afternoon, it’s nearly certain that I didn’t get it, so please resend.

My main email account is down until further notice. If you need to reach me, please send mail to an address formed by taking my surname and adding @law.miami.edu.

Justice Sotomayor will be speaking at UM next Friday as part of her book tour. She’ll be interviewed by President Donna Shalala.

And, on Feb. 11 Justice Anthony Kennedy will be speaking here as part of the Robert B. Cole Distinguished Jurist Lecture Series. I gather our own Patrick Gudridge will be his interlocutor, which should be something to see.

And oh yes, there’s also a pretty star-studded cast of other speakers coming our way in the next few weeks. Do you think it might have something to do with the weather?

The House duly passed the debt limit waiver bill 285 to 144, with 33 Republicans and 111 Democrats voting no. House GOP leaders duly made statements about what a great achievement ‘no budget no pay’ was, perhaps an attempt to distract from how great a climbdown the main part of the bill was.

Most lawyers I’ve communicated with took the view that most every court, and certainly the Supreme Court, would not choose to declare the debt ceiling waiver unconstitutional — even if both mechanistic and good-faith application of current severability doctrine would suggest that it should. That’s probably correct predictively, which says something about the importance of realpolitik in Constitutional interpretation. Although anyone who ever read Dames & Moore v. Reagan should already know that….

Meanwhile Seth Barrett Tillman has proposed a nice way to avoid the severability question altogether. Since the text of the 27th Amendment says “No law, varying the compensation for the services of the Senators and Representatives, shall take effect, until an election of Representatives shall have intervened” the remedy for a bill that violates this provision is an injunction staying the pay terms until the next election. Under this elegant formulation, the pay provision of the bill is not held to be unconstitutional as such, just given no effect until, in this case, it has no remaining effects. Very neat.