This painting by French artist Josse Lieferinxe depicts an intercession by St. Sebastian during an outbreak of the plague.

For a good time, see Ada Palmer, Ex Urbe, Black Death, COVID, and Why We Keep Telling the Myth of a Renaissance Golden Age and Bad Middle Ages. Warning: It’s kinda long by web standards, but well worth the read.

“If the Black Death caused the Renaissance, will COVID also create a golden age?”

Versions of this question have been going around as people, trying to understand the present crisis, reach for history’s most famous pandemic. Using history to understand our present is a great impulse, but it means some of the false myths we tell about the Black Death and Renaissance are doing new damage, one of the most problematic in my view being the idea that sitting back and letting COVID kill will somehow by itself naturally make the economy turn around and enter a period of growth and rising wages.

I’ve Joined the Editorial Board of the Technology & Regulation Journal

I’m proud to be part of the editorial board committee of the brand new Journal of Technology and Regulation (TechReg), housed at the Tilburg Institute for Law, Technology, and Society (TILT) at Tilburg University in the Netherlands.

Technology and Regulation (TechReg) is an international journal of law, technology and society, with an interdisciplinary identity. TechReg provides an online platform for disseminating original research on the legal and regulatory challenges posed by existing and emerging technologies (and their applications) including, but by no means limited to, the Internet and digital technology, artificial intelligence and machine learning, robotics, neurotechnology, nanotechnology, biotechnology, energy and climate change technology, and health and food technology. We conceive of regulation broadly to encompass ways of dealing with, ordering and understanding technologies and their consequences, such as through legal regulation, competition, social norms and standards, and technology design (or in Lessig’s terms: law, market, norms and architecture).

We aim to address critical and sometimes controversial questions such as:

We invite original, well-researched and methodologically rigorous submissions from academics and practitioners, including policy makers, on a wide range of research areas such as privacy and data protection, security, surveillance, cybercrime, intellectual property, innovation, competition, governance, risk, ethics, media and data studies, and others.

TechReg is double-blind peer-reviewed and completely open access for both authors and readers. TechReg does not charge article processing fees.

If You Read One Thing Today

…make it Getting Out (the print title; online it’s the much wordier, “Could an Ex-Convict Become an Attorney? I Intended to Find Out”) by poet, father, Yale Law grad (and ex-con), Reginald Dwayne Betts. 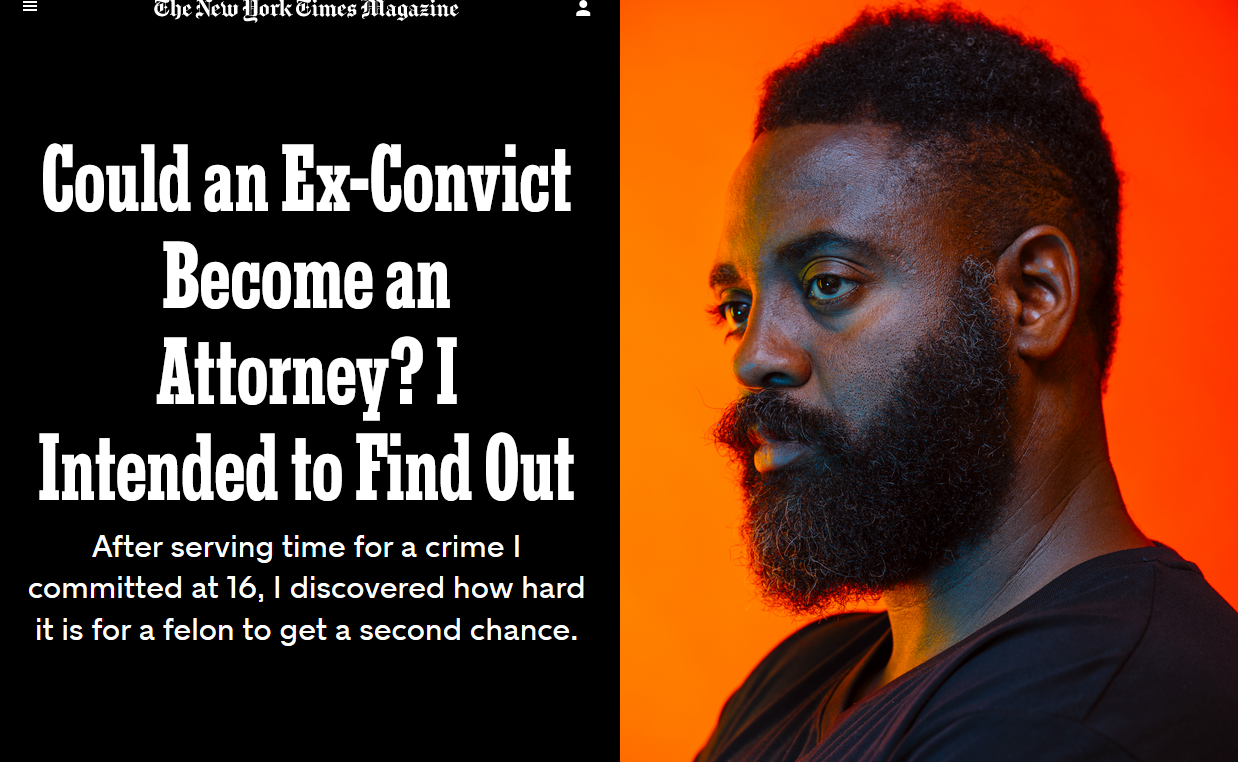 An Extreme Virulence of Facts

In the course of reading an article full of things I didn’t agree with–such as the assertion that “legal scholars have generally overlooked robotics,” with our Robot Law book cited as an honorable exception when it is instead the leading edge of a trend–I came upon an arresting sentence:

[T]he law is characterised by an increasingly central role played by facts, in the sense that there is ‘an extreme virulence of facts, which have the vigour to affect the law and shape it.’

The quoted part is attributed to P. Grossi, ‘Sulla odierna fattualità del diritto’ Giustizia civile, I, 13 (2014). I wonder if it has the same connotations in the original Italian?

In the US, one might be tempted to ask whether facts are indeed more central than they used to be. It could surely be argued, for example, that the move towards statute and away from common law has been largely a victory of rules and theories over facts.

But lets not bother with picky details. I prefer to luxuriate in the idea of an ‘extreme virulence of facts.’ Not perhaps the best name for a band, but it would be a heck of a good name for a blog.

And perhaps it is also an apt description of what starts January 20 at noon?

Of Kurdish House Gardens and Modernity

An article on the 6000-year history of Kurdish gardens cites my Habermas article for its alleged account of Habermas’s modernization theory.

Modernization Theory and House Garden Transformation; Erbil City as Case Study, is jointly authored by scholars from an Iranian engineering department and from the Housing, Building, and Planning department in Penang Malaysia University. The article appears in Aro which is an open-access “journal of original scientific research, global news, and commentary” based at Koya University. Koya University’s very smart-looking web site describes the city of Koya as a “1.0 hr drive to the East of the Kurdistan Region capital Erbil (Arbil, Hewlér) in Kurdistan Region of F.R. Iraq.”

The article begins by defining a garden:

Gardens can be considered as the mirror of house’s architectural identity. It’s a plane outdoor space that arranges a part for the display, cultivation, and enjoyment of plants and other forms of nature as defined by Turner (2005) A garden is “a piece of ground fenced off from cattle, and appropriated to the use and pleasure of man: it is, or ought to be, cultivated”.

However, the article quickly takes a turn towards describing Modernization Theory before heading back to a more extended tour of house garden design in Erbil over the last 6000 years. We then get some quantitative info about how gardens have changed, especially since 1930. One notable finding:

The new functional requirements of modern life style (Social factors) and owning more than one vehicle by family members (Economical factors) affected the garden size (to be small or disappeared totally). Moreover, it reduced the ratio of garden area (open spaces) to house build area. These transformations have a direct impact on global warming and energy conservation.

This does seem significant, although I’m not sure we really need Habermas to understand it.

This isn’t the strangest citation to my work ever, but it’s up there.

Posted on January 5, 2016 by Michael Froomkin

One of the common dismissals of Habermas’s theory of communicative action is that the requirement of an ‘ideal speech position’ is unrealistic. In Habermas@discourse.net: Toward a Critical Theory of Cyberspace I argued first that these critics misunderstood what Habermas required, that the so-called ‘ideal’ was not idealized and thus unattainable, but rather, ‘best achievable in real life’, optimal subject to the constraints of matter and time, and thus — in principle — attainable. Second, I argued that the internet standards process managed by the IETF achieved a Habermasian discourse, at least at times. Recognizing the special conditions, in particular the relative linguistic and professional homogeneity of the participants, I did not argue that the result was necessarily generalizable. Rather, I claimed that an existence proof of even one Habermasian discourse should at least silence critics who claimed the theory was unrealizable.

Comes now Karthikeyan Umapathy, Sandeep Purao and John W. Bagby, who have just published Investigating IT Standardization Process through the lens of Theory of Communicative Action. In it they state that,

I told stories about the IETF, but didn’t formalize them. The authors of this paper tell the story of the SOAP standardization process and count incidents of Communicative Action (31%), Strategic Action (22%), Instrumental Action (18%), “Dramaturgical Action” (15%), and Normatively Regulated Action (14%):

Our findings reveal that participants in standardization processes engage in communicative action most frequently with aim of reaching mutual understanding and consensus, engage in strategic action when influencing others towards their intended goals, engage in instrumental action when taking responsibility for solving technical issues, engage in dramaturgical action when expressing their opinions, and engage in normatively regulated action when performing roles they assumed. Our analysis indicates that 60% of activities performed are consensus oriented whereas the rest are success oriented. This paper provides empirical evidence for Habermasian view of social actions occurring in the standardization process setting.

Again, this is not necessarily generalizable:

In this study, we perform analysis only o n one standard (i.e., SOAP) and on one SDO (i.e., W3C). Thus, findings from this study cannot be generalized for all anticipatory standards or SDOs.

Even so, useful data.