SSRN has The New Authoritarianism in Public Choice 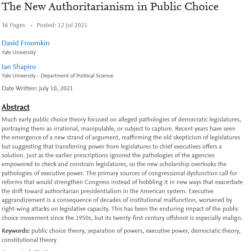 Abstract
Much early public choice theory focused on alleged pathologies of democratic legislatures, portraying them as irrational, manipulable, or subject to capture. Recent years have seen the emergence of a new strand of argument, reaffirming the old skepticism of legislatures but suggesting that transferring power from legislatures to chief executives offers a solution. Just as the earlier prescriptions ignored the pathologies of the agencies empowered to check and constrain legislatures, so the new scholarship overlooks the pathologies of executive power. The primary sources of congressional dysfunction call for reforms that would strengthen Congress instead of hobbling it in new ways that exacerbate the drift toward authoritarian presidentialism in the American system. Executive aggrandizement is a consequence of decades of institutional malfunction, worsened by right-wing attacks on legislative capacity. This has been the enduring impact of the public choice movement since the 1950s, but its twenty-first century offshoot is especially malign.

Note: I am not related to Ian Shapiro.