Ron DeSantis began his term in a way that suggested smarts and a desire to gesture enough to the center to build the sort of happy governing coalition that propels a large-state Governor into Presidential candidate conversations.

Then something happened. Some people snark that his wife, the real brains of the outfit, had another baby and was distracted with motherhood. Or maybe DeSantis, like other Republican pols, fell under they hypnotic effect of Trump’s GOP poll numbers. In any event, when the COVID crisis came along, DeSantis appeared out of his depth, clinging to one idea: Do Whatever Trump Says. The state unemployment system — designed by the evil Rick Scott to be as hard to use as possible — totally failed under the onslaught of claims and has yet to recover. Meanwhile Florida re-opened quickly, and the Governor opposed mask rules.

It has not worked out well: Florida now has one of the leading rates of infection in the nation, and it’s growing quickly.

Today’s news, however, suggests something even weirder than Trump idolatry. In the midst of a rapidly growing pandemic, Governor DeSantis just vetoed all the money the state appropriates for distance education:

With a stroke of his veto pen, Gov. Ron DeSantis wiped out the entire $29.4 million budget for a suite of online education services that have become critical to students and faculty during the Covid-19 outbreak.

The move, barring action before midnight Tuesday, will kill the Complete Florida Plus Program, an array of technology systems that faculty, staff and students throughout Florida rely on, never more so than now, in the midst of a pandemic that has amplified reliance on distance learning. The cuts include a database of online courses and an online library service that provides 17 million books to 1.3 million students, faculty and staff.

At least 2,000 adult learners could be cut off from their scholarships and school accreditation could even be at risk without the resources housed under Complete Florida, which are used by students at high schools, state colleges and universities. Some 150 employees in Tallahassee, Gainesville and Pensacola stand to lose their jobs.

You really have to wonder whether this is malevolence or incompetence. Or is the theory that all will be wine and roses by late August, the schools will reopen as normal, so who needs distance learning? If so, it’s likely madness.

This is going to get under Trump’s skin. In a normal year, I’d condemn it as cheap, and the wrong sort of campaigning, but this isn’t a normal year. Trump has proved himself to be a threat to the survival of the American experiment.

Does double duty – jabs Trump (ties into Bolton revelations too) and inoculates Biden.

I don’t like this ad much, but I think it’s probably going to be effective.

Something called ‘Republicans Voters Against Trump’ is running this ad in South Carolina, North Carolina, and DC. DC is safe Democratic, so that’s just to be annoying. SC is safe Republican, but I guess it’s there to embarrass Graham. NC is a battleground state.

(I presume the quotes are from four years ago.) 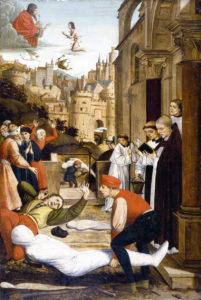 This painting by French artist Josse Lieferinxe depicts an intercession by St. Sebastian during an outbreak of the plague.

For a good time, see Ada Palmer, Ex Urbe, Black Death, COVID, and Why We Keep Telling the Myth of a Renaissance Golden Age and Bad Middle Ages. Warning: It’s kinda long by web standards, but well worth the read.

“If the Black Death caused the Renaissance, will COVID also create a golden age?”

Versions of this question have been going around as people, trying to understand the present crisis, reach for history’s most famous pandemic. Using history to understand our present is a great impulse, but it means some of the false myths we tell about the Black Death and Renaissance are doing new damage, one of the most problematic in my view being the idea that sitting back and letting COVID kill will somehow by itself naturally make the economy turn around and enter a period of growth and rising wages.