Hatch wants to keep his job — and the birthers present a serious problem for him. You see, back only eight years ago, when Austrian-born Arnold Schwarzenegger (for all his faults, still a quite moderate, non-wacko guy) was in his ascendancy with the GOP, Hatch proposed a constitutional amendment — the “Equal Opportunity to Govern Amendment” [“Presidential Eligibility Amendment”] — to allow persons born abroad (like Schwarzenegger) to become president!

This bit of history has become rather inconvenient for Hatch, when he needs to appeal to Tea Party and birther zealots.

Apparently until a couple of days ago, the details of Hatch’s proposed amendment were still available in the direct archives of his Web site, listed along with his other legislative efforts over the years. But there’s a gap in that list of pages now, seemingly where mention of the amendment used to be present.

Of course, looking like you wanted to do Schwarzenegger a favor isn’t going to win you friends with anyone these days.

Unexpected Consequences of Living Near a University Campus

Our A/C is busted again, and the nice man from the A/C company showed up today after only 48 hours of phone calls and two broken appointments to do a leak test on the lines, an expensive process that they tell me takes two days (with no A/C) to establish which of several candidate expensive parts will need to be ordered in (while we have no A/C) and then installed at yet more cost. The scenarios vary from expensive to amazing.

I explain all this not to complain, for such is the joy of home ownership in South Florida, but rather to explain why it is I have my study window open and thus have been hearing a loud buzzing engine noise for a couple of hours. I finally went outside to see if I could figure out what it might be — who would be running a generator when the neighborhood power has been steady for almost a week now? — only to see a blimp circling a bit south of here, with a giant airborne lighted news ticker advertising the 2011 Billboard Latin Music Awards, which I’ve just learned are indeed happening at the Convocation Center right now.

Posted on April 27, 2011 by Michael Froomkin
Keith Aoki, innovative copyright scholar and great guy, has died at the untimely age of 55.

He was a professor at UC Davis and previously at U. Oregon, where I first met him many years ago. 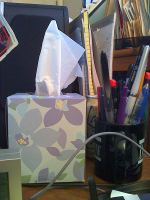 I made it back safely from Chicago, but somewhere in the journey I caught a tremendous cold and have done little but sleep since my return.

It always seem to me particularly pathetic to have a cold in the (sub)tropics. It’s over 80° out, and I’m in here sniveling.

However, I’m delighted to learn that while I was snoring, both (all three?) wars ended, and we are now in ‘peacetime’. I suppose that explains why there is no war surtax.

Stuff we don’t need in Miami

Off to Chicago (Briefly)

Later today (Thursday), I’m flying off to Chicago for a very very brief visit. I intend to be back late on Saturday. I doubt there will be much time for computer access during this visit, so things could be very quiet here.

I understand that the temperature in Chicago is expected to reach as high as 50° F tomorrow — which makes it somewhat colder than here — so I plan to dig out that coat. It doesn’t get much exercise, poor thing.