There are six worthy constitutional amendments on the ballot.

Let’s start with the most important one: Amendment 4.  If you do nothing else with this year’s crop of amendments, you should vote for this one. Amendment 4 re-enfranchises persons convicted of felonies–excepting persons convicted of murder or rape.  Currently, Florida is a national outlier, with one of the most arbitrary, unfair, difficult, and slow procedures for felon re-enfranchisement.  Many states don’t strip voting rights at all; of those that do, most restore voting rights automatically after some number of years of good behavior. Florida has about 1.5 million people who would get their rights back with this change.  Under the current rule, their only way to get the right to vote back is to petition a committee headed by the Governor, one which operates in an utterly arbitrary manner.  (The process is so bad that it was struck down by a federal court, although the decisions has been stayed pending appeal.  Read the decision in Hand v. Scott if you want to see just how badly this committee behaves.  We used to say that when someone serves a prison term they “have served their debt to society”; why then should we keep them on a payment plan?  Research suggests that rest0ring voting rights–removing a badge of infamy–helps reintegrate prison veterans into normal life.  And, of course, there are stories of exceptional people being held back by childhood mistakes. See, for example, Getting Out.

Both the morality of restoring an important human right to former prisoners and the social science agree: vote FOR Amendment 4.

Amendment 3 will block the expansion of casino gambling by requiring voter approval for new casinos.  I’ve gotten more misleading mailers about this one than anything else–the gambling people, who have way too much money, oppose it. They’ve been claiming that if we block new gambling our schools and teachers will starve to death, because, of course, there is no money for schools other than a tax on casinos?  Even if I wasn’t for Amendment 3 on the merits, I’d be for it just because who opposes it and how they have run their deceitful campaign.

There is, it should be said, a small downside to Amendment 3, but it has got nothing to do with school funding. Rather, the downside is that by blocking new entrants we entrench the monopoly position of existing casinos, which amounts to a windfall to some undeserving people. But that’s still better than bringing in even more casinos.  Casinos mean a few lousy jobs, and a lot of graft; if you’re lucky it’s the more legal sort that buys politicians.  If you are not lucky it is the less legal sourced that involves the Mafia and its grandchildren.  No thanks. Vote FOR Amendment 3. 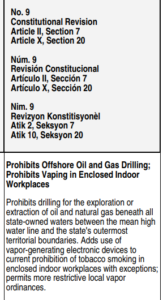 Amendment 9 will ban offshore oil and gas drilling and also ban indoor vaping.  Strange bedfellows, but since I’m for both bans, this is an easy vote.  A third part allows localities to enact even more stringent vaping restrictions.

I don’t really have much to say here.  The oil and gas rules make sense given that Florida depends on its coastline to attract tourists, and a spill thus has disastrous economic consequences even beyond the environmental ones. This is worth constitutionalizing.

Vaping strikes me as a rather weird thing in general, and also a rather weird thing to put into the constitution.  Were this an amendment on its own, I’d probably oppose it on the grounds that we should save the state constitution for important things or things that we can’t get through a gerrymandered legislature, and this is neither.  But on the merits I’m fine with it. 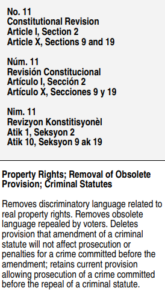 Amendment 11 is mostly about tidying up stuff.  The most important substantive changed worked by this amendment is that it opens the door to a form of retroactive leniency.  Under current law, if the legislature softens or repeals a criminal law that changes does not, cannot, have retroactive effect.  This amendment would remove the impediment to retroactive leniency, although it would not require it.

Suppose for example that we legalize marijuana.  Under current rules anyone in jail for pot possession gets no benefit from that change.  If the amendment passes, it would be open to the legislature to say that people who violated the possession law before it was repealed would be freed.  It’s just a choice; if the legislature doesn’t want to do that, it doesn’t have to. Indeed, new prosecutions of crimes committed before repeal remains a possibility. Also, even if this amendment passes, there is no danger of retroactive increases in penalties if the legislature toughens a criminal penalty because ex post facto laws of that type are prohibited by the federal Constitution. 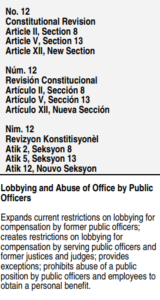 Amendment 12 toughens a few ethics rules.  To be honest, I don’t think these changes are going to make much of a noticeable difference to local corruption, as a longer ban on people lobbying after they leave office doesn’t address what ails us. But I suppose it cannot hurt, so I’m for it.

Amendment 13 will ban dog racing in Florida, and allow existing dog tracks that get to have slots only because they have a dog track to continue to host slots even after the dogs are gone.  I confess I feel like I don’t have a dog in this hunt, and that again this seems like something that belongs in legislation rather than the state Constitution, but the thing is going to pass, and there enough stories about dogs being mistreated at tracks to make me think that on the merits it is a good idea.  Note that current tracks can still display and take wagers on out-of-state dog races.

I was interested to learn last week that a majority of the 16 or so dog tracks in the USA are located in Florida. So it is possible that this amendment will have a big effect on the industry.