Posted on December 16, 2016 by Michael Froomkin

In my effort to avoid starting grading, I followed a link from Lifehacker to Amazon’s sale of a white-noise machine. I was somewhat surprised to see what Amazon paired it with: 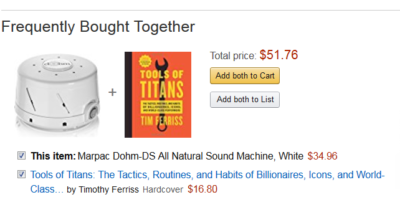 I suppose sleeping better makes you a better worker/investor/whatever thus perhaps increasing your odds of becoming a billionaire from almost zero to …. still almost zero?

Didn’t buy the machine as I don’t think it makes a good gift, although the $35 price seemed very reasonable.

I’m one of the more than 500 signatories to this letter in which UM faculty take a stand against hatred, intimidation, and a “post-truth” world. The letter was written by members of the English Department.

Text of the letter is below.

END_OF_DOCUMENT_TOKEN_TO_BE_REPLACED

Donald Trump wants to ‘close up’ the Internet:

In a speech at the U.S.S. Yorktown in Mount Pleasant, South Carolina, on Monday, Trump referenced the use by ISIS of social media as a recruitment tool. He recommended a discussion with Bill Gates to shut off parts of the Internet.

“We’re losing a lot of people because of the Internet,” Trump said. “We have to go see Bill Gates and a lot of different people that really understand what’s happening. We have to talk to them about, maybe in certain areas, closing that Internet up in some way. Somebody will say, ‘Oh freedom of speech, freedom of speech.’ These are foolish people. We have a lot of foolish people.”

Well, count me as one of the foolish I guess. Although not quite so foolish as to think Bill Gates runs parts of the Internet.

PS. To those offended by the headline: what else am I supposed to call it? Bullshit?

Miamians Are Going on Twitter to Ask Donald Trump to Deport Their Exes.

According to the New Times, “dozens of folks,” many in the Miami area, are tweeting addresses and photos, some cc’ing the police, in the hopes of getting their revenge. They have screenshots of examples.