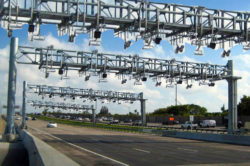 The Miami-Dade Expressway Authority (MDX) announced on Monday that it plans to greatly expand the number of toll plazas along State Road 836. The plan, which will take thirteen years and cost upwards of $1.4 billion dollars, will see 60 new toll installations along the 15-mile expressway. The design was unveiled to the County Commission and Metropolitan Planning Organization to resounding applause by an unnamed representative of the MDX, a Borg-like collective comprised of 13 assimilated, unautonomous board members.

This came up on my RSS feed, and I was really believing it, especially given the photo of the Sunpass scanners, until about the end.

Actually, like much great dark humor, it expresses a deeper truth.

This entry was posted in Completely Different, Miami. Bookmark the permalink.