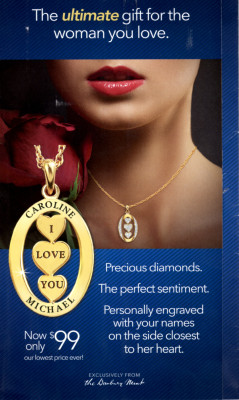 When I got home yesterday, this ad (which is actually just the front of a very involved mailer that opens up to have three more sales sheets inside) was waiting for me in the day’s mail. I’m used to getting ‘personalized’ mail that addresses me by name — often by the wrong name since I haven’t been called by my legal name since birth. But this was the first piece of direct mail that linked my name and my wife’s. Since I spend much of the day reading and thinking about databases, identification, and privacy, I wasn’t terribly creeped out about this, but Caroline clearly was, saying it was “excessively personal.” I don’t think the problem was the knowledge that someone knows we are together, since we haven’t made much secret of it for the last 26 years or so. Caroline also asked me to note that the necklace is very ugly.

The ad does make me wonder how often things like this turn up with the wrong name on it (fortunately, my wife’s name is indeed Caroline). Or just after people die, or break up. Could get ugly. Queue references to the famous Target incident.

Note to marketers: I believe that when we had the insides of our wedding rings engraved with our names we exhausted our demand for personalized jewelry.

Staff shenanigans like this seem to be part of ICANN’s DNA. It’s a real shame.

I don’t write about ICANN anymore, but some relevant past papers include Almost Free: An Analysis of ICANN’s ‘Affirmation of Commitments’, ICANN 2.0: Meet the New Boss, ICANN’s UDRP: Its Causes and (Partial) Cures, Internet Governance: The ICANN Experiment (Or, Three Paradoxes in Search of a Paradigm), and especially Wrong Turn in Cyberspace: Using ICANN to Route Around the APA and the Constitution and the related Form and Substance in Cyberspace.

And then of course there was ICANNWatch.

You may have noticed in the last few days that some apps don’t work right on your android phone – they close as soon as you open them, or in the middle of using them. I had this problem with Handcent, and also with clicking on (most) articles on some (but not other) apps from online news sources. Many other apps are also closing unexpectedly. This is certainly a problem in my HTC One M8, and I gather it has hit some android tablets too.

The source of the problem is an update Google did to the “Android System WebView” app. Despite looking like an app, this is really part of the Android operating system: Google is moving to transition from having all Android updates come in Android version releases and spinning off parts that it update more quickly (and behind the back of the phone makers and cell phone companies) via the Play Store.

To solve the problem you must do 3 things:

No word from Google yet when they will fix this. You’d think HTC would be on to them about it.

Why Coral Gable Should Use STV for Commission Elections

Because Coral Gables does not have run-off elections, there is always a risk in multi-candidate Commission elections that a person might elected with less than a majority vote.  Indeed, this has happened more than once in recent memory, with the most recent case being now-Commissioner Slesnick who was elected with 32% of the vote in a six-candidate race.

A run-off, however, would be expensive, and also risks declining voter participation. Voter participation is already low enough in the April off-year election. One solution would be to move the election to the ordinary primary date in August, and have any necessary run-off in November. I have detected very little appetite for this among Commissioners and other movers and shakers in the Gables. The reasons vary. Some people think that too many people are on vacation in August. Others think that too people who don’t care much about local government would vote (the polite term for this is ‘fear of low-information voters’). Still others think that the non-partisan character of the race would be overrun with the partisan fervor of the regular election. And yet others fear that come November UM students would have too much sway. I don’t agree with most of these views, but they’re out there.

Fortunately, there a solution to the problem of running a fair multi-candidate election that produces a majority winner without having to change the election date or having a second, runoff, election. The solution is to switch from the current first-past-the-post voting system to Single Transferable Vote (STV), also known as Instant Runoff Voting.

With the very able help of my research assistant,  Steven Strickland, I’ve written a memo which outlines some of the advantages of using STV and sent it to each of the five members of the Coral Gables Commission. I hope that Coral Gables will consider changing to STV for future elections to ensure that our elected officials have the support of the majority of the electorate, and are seen to have that support.

The text of our memo, reformatted to make it more web-friendly, is below.
END_OF_DOCUMENT_TOKEN_TO_BE_REPLACED

‘Ideology’ or ‘Situation Sense’? An Experimental Investigation of Motivated Reasoning and Professional Judgment:

This paper reports the results of a study on whether political predispositions influence judicial decisionmaking. The study was designed to overcome the two principal limitations on existing empirical studies that purport to find such an influence: the use of nonexperimental methods to assess the decisions of actual judges; and the failure to use actual judges in ideologically-biased-reasoning experiments. The study involved a sample of sitting judges (n = 253), who, like members of a general public sample (n = 800), were culturally polarized on climate change, marijuana legalization and other contested issues. When the study subjects were assigned to analyze statutory interpretation problems, however, only the responses of the general-public subjects and not those of the judges varied in patterns that reflected the subjects’ cultural values. The responses of a sample of lawyers (n = 217) were also uninfluenced by their cultural values; the responses of a sample of law students (n = 284), in contrast, displayed a level of cultural bias only modestly less pronounced than that observed in the general-public sample. Among the competing hypotheses tested in the study, the results most supported the position that professional judgment imparted by legal training and experience confers resistance to identity-protective cognition — a dynamic associated with politically biased information processing generally — but only for decisions that involve legal reasoning. The scholarly and practical implications of the findings are discussed.

Spotted via Solum, Kahan, Hoffman, Evans, Devins, Lucci and Cheng on Experminental Assessment of the Effects of Motivated Reasoning on Actual Judges.