The crowd likes it and shouts “Four More Years”.

Next is Debbie Wasserman Shultz. She makes a “U” — The crowd loves her. She’s beaming. (I’m still sore about not her not supporting Joe Garcia more energetically in 2008, but I’m an old grouch.) But she sure knows how to work the crowd. Her big line: this election, “it’s personal!” It’s about health care, about medicare for seniors, and for students. (Are there any hurricanes in the house? Gets “YAY” followed by chants of “FIU FIU FIU” then cross-booing … sounds almost ugly for a moment. But pro that she is, DWS gets them back on track – “we are all here on Team Obama”.

Meanwhile the folks behind me are clamoring for attention. I have a great photo but the local wireless is too congested for my phone to upload it.

Update – here it is: 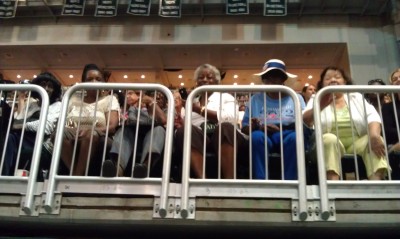 Then it’s Senator Bill Nelson. He makes a “U” and the crowd loves it. I was born in Miami, and my dad was a member of the first law class at UM. We found an old photo … A quarter of that class were women in 1926!

On substance, Nelson is pretty good. He goes after Romney/Ryan for the “cuts to Medicare” lie. And for Romney’s abortion remarks “what has he said consistently throughout the campaign? Exactly the opposite.”

This entry was posted in 2012 Election, U.Miami. Bookmark the permalink.