Below I offer an account of the debate among the three candidates for Mayor in Coral Gables held on Tuesday at the Cosford Cinema. Yesterday I posted Coral Gables Candidate Debate: Part 1 – Commission Group 4 and Group 5 (Updated). Since then there has been writing about the debate elsewhere, notably George Volsky’s dyspeptic but not unfair critique of the format in the Coral Gables Gazette, Chamber’s Election ‘Forum’ A Bust. Candidates were limited to tiny short answers about complex subjects, were not actually allowed to engage each other (thus, it’s not really a ‘debate’ at all), and the questions were somewhat limited in range.

Before the debate I had not been paying as much attention to the Mayor’s race as to the Commission Group 4. One reason was that, as I have written before, I think the incumbent, Don Slesnick, has done an OK job. (I know many others disagree, but that’s how I feel.) So I went in willing to be persuaded someone else was better, but not feeling that I had to have a change. I was willing to listen to challengers James Cason and Thomas Korge, but I was feeling skeptical. For all its faults, which were numerous, I thought the debate told me something useful about each of the three candidates. I left leaning fairly strongly towards one of them.
END_OF_DOCUMENT_TOKEN_TO_BE_REPLACED

A new dirty campaign mailer landed in my mailbox today, further muddying in the increasingly slimy race for Coral Gables Commission Group 4. The mailer purports to be from a new shady group, the “Committee for Coral Gables Future,” and is aimed at a new target: Jim Cason.

One side says “Who is Jim Cason? Can we Trust His Judgment?” It has a sickly green photo of him and in the background “Doesn’t Vote”, “Bad Judgment”, “Questionable Integrity”, and “We Can’t Trust Him”. (You can click the pictures below for larger images.) 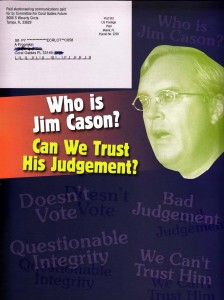 The other side has the sickly green photo again and this: “Jim Cason, Means Bad News for Our Community. He has only lived in Coral Gables for two years. he has never voted in Cral Gables and chose to skip voting in the last Coral Gables Mayor’s race. he has hired a man convicted of bringing an election official in Miami as his campaign manager. his campaign manger, a convicted felon, is awaiting deportation to Cuba. Jim Cason: We Just Can’t Trust Him.” 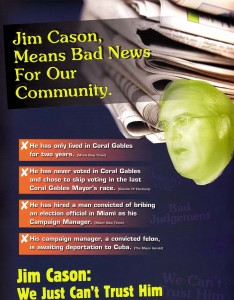 The interesting question is who is behind this piece of high-minded electioneering.

The return address identifies the sender as “Committee for Coral Gables Future,” a name unknown to Google. It is different from “The Accountability Project” which was the name used for last week’s attack ad against Brad Rosenblatt.

None of these people have a connection to Coral Gables that I can see. So who is behind it?

Minutes after today’s first robocall, I got a different robocall on my cell phone.  It was one of those scam ‘reminder that you received an official notice of an opportunity to reduce the interest on your credit card bills’.  Time, the generic recorded voice warned, is about to run out on this great opportunity.

Of course, I never got any such offer, they don’t actually mail them, they are trying to fleece you.  But I pushed the button to talk to a person anyway, just because.  It rang and rang and rang.  And rang and rang.  And the sound was like an old-time rotary phone.  But eventally a woman with an odd accent that I couldn’t place picked up.

Was I was responding to the offer to consolodate my Mastercard or Visa?  I said yes.

Did I have more than $5,000 of credit card debt? I said I liked to know who I was talking to.  She hung up instantly.

The caller ID says the call came from 21240715129, which is no doubt designed to look like it came from a New York area code.  But in fact, given the extra digit, I have to presume it actually came from Marrakech, Morocco, from +212 (4) 071-5129.  But not having free worldwide calling, I haven’t tried to confirm that.

I did try Googling the number, but no luck.  So I’m posting this.  If they called you, I think you are safe assuming it is a scam: no one honest trying to sell you something hangs up if you ask who they are.

Somebody’s voice identifying the owner as something like “Maria Nicholas” (I think that’s what it sounded like) just robocalled me and urged me to vote for Gonzalo Sanabria in the Coral Gables County Commission race because he is the only registered Republican in the Group 4 race. It called him a “good Republican” and said he do the sort of things they do — slash budgets and the like. (It was a short call and went by too fast for me to try to take any near-verbatim notes.)

Needless to say, the association of Sanabria with the Governor of Florida did not make me more likely to vote for Sanabria, rather the reverse. And it’s worse than that: I had no idea Sanabria was the only Republican in the nonpartisan race. After all, several of the other candidates, including Quesada, are sounding pretty Republican to me.

The call did not say it was paid for by the Sanabria campaign, in fact it did not identify who paid for it at all. I don’t have caller ID on my land line so I can’t identify the source that way either. (If anyone who does gets this call, please let us know.) Unless this is a false flag operation, someone is not spending their money at all wisely: if they can figure out that I live in the Gables from the voter records, it shouldn’t be that hard to look up the fact that I’m registered as a Democrat and correlate that with my phone number.

Does anyone know who “Maria Nicholas” or the like might be? Is she a local GOP bigwig? Also, do independent political expenditures (if that’s what paid for this) in a municipal election have any legal obligation to ID the source when doing robocalls? I know they would have that obligation in a federal election, but I don’t know the relevant state/local law.

I went to the Coral Gables candidates’ debate this evening, sponsored by the Coral Gables Chamber of Commerce. I walked in genuinely undecided about all the races, and in some cases pretty uninformed. I walked out knowing there was no choice in Group 5, and I think I may have figured out who to vote for in the Mayor’s race, but I remain undecided in Group 4. Today I’ll write about the Commission debate. I’ll try to post my account of the Mayor’s race debate tomorrow.