People for the American Way, a group that stands for traditional American values including civil liberties and equality has issued a ‘fact sheet’ on Judge Alito (or, read the summary fact sheet). The tenor of the report is summed up in the (somewhat shrill?) headline “Samuel Alito: Leading the Attack on Fundamental Legal Rights and Protections for All Americans”.

Angry Bear takes a look at an Alito decision on the Family and Medical Leave Act (FMLA), and reports that “All in all, my first foray into learning about Samuel Alito was not an encouraging one.”

Kash reports that Alito’s way-out-of-the-mainstream opinion was rejected by the Supreme Court, 6-3, in an opinion by Chief Justice Rehnquist. (I must confess, though, that I don’t recall that decision; I will (re)read it, and if I find anything that contradicts Kash’s analysis, I’ll update here.)

Update: The Alito opinion in question is rather conclusory on the key points, which may make it more or less awful depending on whether you are a glass half full or empty type person. And the Supreme Court opinion is not a direct review, but rather a review of later decision by the 9th Circuit. Thus Chief Justice Rehnquist’s opinion doesn’t directly engage Judge Alito’s, but does indeed reject the views he adopted.

The law school school roared back into session today, and my Administrative Law class was, at 8am, the first class most of my students had since Hurricane Wilma. Those of us without power were feeling the strain.

It being Halloween, I thought I should wear a costume to class in order to cheer things up. I wanted to go as something scary, so I went as a law professor. Here’s a photo: 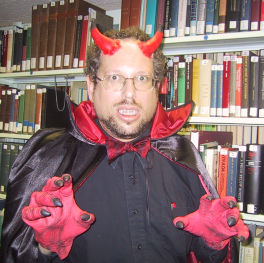 It was slightly disturbing that some people didn’t seem able to tell the difference from how I usually look….

Three posts of interest by Eric Muller, who used to work (briefly) for Sam Alito: Sam Alito, As I Knew Him, Its Alito, and The Alito Nomination and Gender Equality.

It’s Halloween today, which means you shouldn’t trust everything you see.

This is an amazing optical illusion.

And this optical illusion is almost as amazing.

One of my (heretofore) secret vices is that I read Kevin and Kell online every day (via the Herd Thinners Incorporated site). It’s a very funny Internet-themed online comic strip, but really getting the jokes sort of requires that you go back and read Kevin & Kell from the start.

I mention this because today’s strip’s daily sponsor ($5 donation) is Larry Niven (or someone pretending to be Larry Niven), and the message of the day is “Kzinti Diplomatic Corps/let’s do lunch.” Which will be very funny to some, and incomprehensible to everyone else…

(Note to super-purists: Yes, I understand that if Hroth is invited too then it’s not as funny.)