Nothing is Ever Simple

Posted on December 2, 2012 by Michael Froomkin

Naked Capitalism has more about Why Strike Debt’s Rolling Jubilee Puts Borrowers at Risk. Serious tax stuff. Not only isn’t this simple, but it actually does seem to carry real risks all around.

Posted on November 18, 2012 by Michael Froomkin

I wrote previously of Occupy Wall Street’s plan to buy and forgive distressed consumer debt. A commentator on that post noted that it created a tax issue, and a colleague agreed it was a risk. A fuller treatment of the problem, and some instant revisionist thinking about the ‘Jubilee’ program in general is over at the excellent Naked Capitalism blog, Occupy Wall Street’s Debt Jubilee: A Gimmick with Tax Risk.

Like most of the things they run, well worth a read.

Posted on November 8, 2012 by Michael Froomkin

This is very cool: The People’s Bailout — Occupy Wall Street plans to buy distressed consumer debt for pennies on the dollar … and then forgive it.

OWS is going to start buying distressed debt (medical bills, student loans, etc.) in order to forgive it. As a test run, we spent $500, which bought $14,000 of distressed debt. We then ERASED THAT DEBT. (If you’re a debt broker, once you own someone’s debt you can do whatever you want with it — traditionally, you hound debtors to their grave trying to collect. We’re playing a different game. A MORE AWESOME GAME.)

This is a simple, powerful way to help folks in need — to free them from heavy debt loads so they can focus on being productive, happy and healthy. As you can see from our test run, the return on investment approaches 30:1. That’s a crazy bargain!

Now, after many consultations with attorneys, the IRS, and our moles in the debt-brokerage world, we are ready to take the Rolling Jubilee program LIVE and NATIONWIDE, buying debt in communities that have been struggling during the recession.

As Rafe Colburn says “Incredible example of hacking the system for positive change.”

Anatomy of a Self-Deception

Posted on September 19, 2012 by Michael Froomkin

The second half of Brad DeLong’s The Republican Noise Machine and Mitt Romney: The Con Artist Conned is really excellent, so in tribute I’m going to do a DeLong and quote it well beyond the ordinary bounds of fair use:

Then Romney gives what he thinks is the ultimate argument for why the rich-envying Democratic base will not vote for him:

These are people who pay no income tax. 47% of Americans pay no income taxes. So our message of low taxes doesn’t connect. And he’ll be out there talking about “tax cuts for the rich”. That’s what they sell every four years.

Then Romney’s brain is supposed to say: “I cannot get the Democratic base to vote for me: they won’t. I need to focus on the swing voters”. It begins to pivot:

And so my job is not to worry about those people.

But it doesn’t succeed. When Romney’s brain hits the phrase “those people”, it goes off message. It switches tracks. It jumps from what it is supposed to say–“I can’t worry about getting their votes: I need to focus on the undecideds”–to what it actually, deep down, believes:

I’ll never convince them that they should take personal responsibility and care for for their lives.

Then Romney realizes what his brain has done, and wrestles it back onto the message track:

What I have to do is convince the 5% to 10% in the center that are independents, that are thoughtful, that look at voting one way or the other depending upon, in some cases emotion–whether they like the guy or not. What it looks like. When you ask those people–we do all these polls. I find it amazing. We poll all these people to see where you stand in the polls…

Now Romney was never supposed to say or think this.

Romney was–along with those at the Wall Street Journal and elsewhere who made up the “lucky duckies” meme–supposed to know that it was not true. It was supposed to be what the writers at the WSJ call “boob bait for the bubbas”: misinformation that has two purposes: (i) to get some low-information voters to open their wallets to Republican candidates; and (ii) to confuse others, so that they will vote for Republican politicians who will cut programs they rely on for their place in the middle-class, and use the money to fund more tax cuts for the rich.

We know this because of the care with which the 47% talking point was constructed:

Low-information voters are supposed to hear this and process it as “47% pay no taxes” and conclude “they–not me–are moochers!”

Republican operatives and candidates are supposed to know that almost every word in “last year 47% of tax units paid no net federal income taxes” is necessary for the deception. “Last year” because right now the share of taxpayers is far below normal because of the lesser depression–and that is a good thing. “Tax units” because we are talking not about a share of Americans but rather of pieces of paper flowing through the IRS. “Federal” because lots of people pay state and local taxes. “Income” because lots of people pay payroll taxes. “Net” because for historical reasons we channel our Child and Earned Income Tax Credits–programs loved by, among others, Ronald Reagan–through the IRS rather than through HHS.

Omit any of those words, and the 47% figure becomes a lie.

And in the form that it was intended to be received–as “47% pay no taxes, the moochers!” it is a lie.

Romney’s claim that the Republican message of income tax cuts focused on the rich does not resonate for these 47% seems to me to be largely wrong.

But Romney’s claim that these 47% are “moochers” who will never have personal responsibility or care for their lives is simply insane.

So how did Romney come to think that:

I am thinking that there were lots and lots of conversations over the years about “those people”, and how they do not care about their lives, and about how they have no sense of personal responsibility, and about how they envy the rich. I am thinking of right-wing science fiction novels that preach about how by the middle of the 21st century the United States was divided into “citizens” and “taxpayers”–with the unproductive, lazy, uneducated masses of the first penned into their ghettoes and living off of the second. I am thinking that, as Ta-Nehisi Coates puts it: we are all welfare queens now. I am thinking that Romney and his speechwriters have spent much, much, much too much time at the American Enterprise Institute where, the General Theory of Moocherhood, as Mark Schmitt puts it, is being developed.

As Mark Schmitt writes, Arthur Brooks and Nicholas Eberstadt of the AEI paint a fake picture in which:

receipt of benefits makes people “dependents,” that people are becoming “chiselers,” choosing to maximize benefits, that the expansion of entitlements was a political effort by the left that slowly overcame “resistance” from real Americans…

people who receive benefits are no more or less “dependent” than corporations that get tax breaks or legal protections, that the expanding costs of major entitlements are about rising health care costs and, to a lesser extent, the demographics of an aging nation rather than more people becoming “takers,” and that the expansion of some benefits to the lower rungs of the middle class was a bipartisan project in which conservatives should take pride…

We are, overwhelmingly, both contributors to and drawers on the national treasure–that is what it is to be a citizen.

There should have been people to deprogram Mitt Romney when he began to fall victim to this AEI cult. Wall Street Journal editorialists should have warned him not to confuse the “prolefeed” they distribute with the way the world actually works. Economic advisors like Eddie Lazear ought to have straightened him out about the state of the labor market, while Harvey Rosen and Greg Mankiw ought to have convinced him that you would not expect Social Security recipients to pay income taxes. Somebody should have told Mitt Romney that roughly half of those who are currently paying no income taxes will vote for him in November.

Does Romney spend so little time talking to real policy advisors that these issues never came up?

Does Romney suffer from CEO disease to such an extent that pointing out that he believes something that is not true is such a career-limiting view that nobody dares do it?

Whatever: in this case one of the con artists has managed to get himself conned.

So it is more important than ever to work very hard to make sure that we do not.

Posted on September 16, 2012 by Michael Froomkin

Here it is in one nice chart, from the Economic Policy Institute via Occupy America | Crooks & Liars: 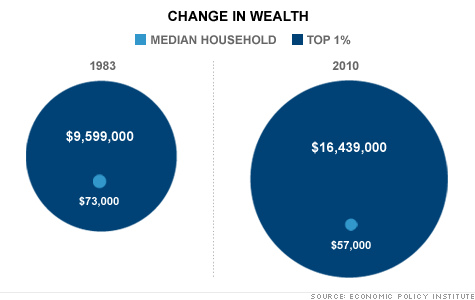 If you prefer it in words,