Posted on August 9, 2021 by Michael Froomkin 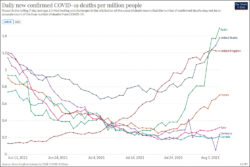 USA #2 in Covid Deaths per million in 2021 (Johns Hopkins via Kevin Drum). Click for larger image.

It is a luxury to be irresponsible in a society where others will be responsible for you, where you simply assume that you are safer because others take the appropriate precautions to be safe: You do not need to get the shot because others have.

But the Delta variant is testing that faith.

You will not be safe as an unvaccinated person riding on the coattails of the vaccinated. Delta is extremely transmissible and unremitting. It is stronger than its progenitor.

As the Delta variant surges there is an uptick in the pace of vaccinations in the country. It’s almost like religion: Many disbelievers will call out to whatever God there may be when the reaper is at the door. Fear of ideological defeat is no match for the fear of imminent death. And yet, it shouldn’t have taken another surge of sickness and death for good sense to set in.

Why were Americans turning away a vaccine that many people in other parts of the world were literally dying for? Many did so because of their fidelity to the lie and their fidelity to the liar. They did it because they were — and still are — slavishly devoted to Trump, and because many politicians and conservative commentators helped Trump propagate his lies.

It was all lunacy. It is all lunacy. This should never have happened. There are people dead today — a lot of them! — who should still be alive and who would be if people in the heights of government and the heights of the media had not fed them lies about the virus.

But apparently, after you get so used to so much blood on your hands, you forget — or make yourself forget — that you weren’t born with red palms.

I think we need much more of this. It is time to call out the politicians and TV/Radio stars who inveigled against the COVID vaccine — and most especially those vaccinated themselves — and say, in the sort of plain speaking that responsible people in public debate have tended to avoid, that opinion-makers who led people to mistrust the COVID vaccine are killers.

In particular, it is past time to call out, in the harshest terms, those Governors who–while claiming they are protecting freedom and choice–prohibit localities in their states from imposing mask mandates and other COVID precautions  That includes Texas Governor Greg Abbott and of course our own Florida Governor Ron DeSantis.

That is not protecting choice, that is protecting irresponsible and potentially deadly behavior.  It is no more responsible than telling people it’s OK to drive on the wrong side of the road, and those traffic-cop supporters are against freedom. We’d call that out, wouldn’t we?