The Rent is Too Damn High 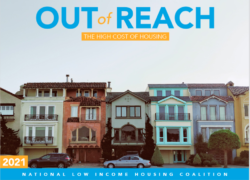 Lots of news outlets picked up on this report by the National Low Income Housing Coalition stating that there is no place in the USA where a person with a 40-hour minimum wage job can afford a two-bedroom rental.

I’m very much for greater equity, and I think it’s likely true as a general matter that this is a particularly bad time for new renters due to the house-buying mania plus the moratorium on evictions (both of which restrict supply of available rentals), but at a first glance this report seems to have some issues.

For starters, they stacked the deck by pricing 2 BR rentals with one worker with one job and no overtime. Why does a single person need a 2 BR to live? Or even a couple without kids? I agree that in a wealthy country like ours, decent housing ought to be a basic right, but does decent housing mean a 2BR for everyone?

What this report suggests to me is how tough things can be for a single parent, but even then in most states a single parent on 40hrs minimum wage ought to get various kinds of aid, e.g. food stamps, sometimes section 8 housing vouchers [which admittedly can be hard to use] or maybe the Low-Income Housing Tax Credit (LIHTC), plus Earned Income Tax Credit (EITC), plus now child subsidy. There’s no sign the report took account of any transfer payments at all nor that it took any account of family circumstances.

Also is it weird to think that maybe many single minimum wage job holders might live in shared housing? Have half of a 2BR? Or a share of a house? When I was a single law clerk I lived in an efficiency, not even a 1BR.

Yes, a two-parent household with kids often has to have at least 2 jobs, maybe more, to hope to make ends meet, and that is a real problem, but that isn’t what this study says, and that isn’t what got into the headlines (e.g. CNN, “Minimum wage workers can’t afford rent anywhere in America“).

And, oh yes, the numbers they used probably are too general to support the scare headline. To identify the cost of rent they use a HUD number, the FMR, which is based on an entire metro area. As the report itself notes, “The FMR is usually set at the 40th percentile of rents for typical homes occupied by recent movers in an area. FMRs are often applied uniformly within each FMR area, which is either a metropolitan area or nonmetropolitan county. Therefore, the Housing Wage does not reflect rent variations within a metropolitan area or nonmetropolitan county”.

In other words, in a large metro area, there could be less expensive parts of town with substantial amounts of more affordable if less desirable housing, but the FMR for the city/county could be pulled up by having lots of more expensive housing too.

This is not my subject, so I’m very open to correction, and I don’t want to suggest there is not an unequal income crisis, which in turn feeds a housing crisis, but I think this particular report is more advocacy than serious research. And thus, I suspect, it’s not actually the case that there are no places in the US where adequate housing can be afforded by a single person on a minimum wage and by couples on two minimum wages. Maybe it won’t be a great neighborhood, it likely will not be a 2BR, maybe even shared housing, it may be older, but I have a strong suspicion that it often exists. Not, perhaps, in San Francisco and a few other outliers, but likely much more often than this scare headline suggests?