Watching the 1/6 invasion of the Capitol on TV in real time, it was easy to think that most of the people were a strange sort of riot tourists. Yes, a vanguard looked tooled up, but the mass we saw on TV looked more along for the ride than anything else.

Since then, we’ve learned that key things were not on camera. There was some substantial advance planning among at least a portion of the insurrectionists. They may have had help from inside the building, both police and even members of Congress. They had phone calls or texts to people in the White House. There was a lot of big financial support from groups committed to overturning the election.

We also learned that Trump’s efforts to get certain states to overturn their results were much more extensive than first appeared from the inconclusive meeting with Michigan electoral officials. There were, at least, extensive efforts in Arizona and in Georgia, a key piece of which we have on tape.

And of course there were three score and more lawsuits around the country.

What was missing from the picture was the military angle. To run a real coup requires troops. We knew that Trump cleaned out top officials from the Pentagon and replaced them with acting officials who had the mien of stooges. That seemed to have cleared the decks for some sort of military action. The prospect of something certainly scared Dick Cheney enough that he convened a large group of former Defense Secretaries to write a warning to the military to stay out of the election. Yet, no sign of actual military activity manifested. Did the Cheney letter head something off?

Now, however, a different story seems to be coming into focus. The military angle wasn’t action as such: rather it was enforced inaction. Not only were the Capitol Police kept from preparing, or lulled into inaction, but so too was the National Guard. And this goes much further than not activating them: Acting Defense Secretary Miller tied the DC National Guard’s hands in what seems an extraordinary fashion, forbidding all the following from being deployed, used, or done by the Guard on Jan 5-6 without his personal approval:

In short, the Guard was rendered completely ineffective.

In other words, there was a plan: the plan was to remove all impediments both civilian and military that might get in the mob’s way, and then, to coin a phrase, unleash the Kraken.

And, it came quite close to working, in the sense that had there been a bloodbath then Congress might have found itself unable to act on the 6th. Personally, I don’t think that would have sufficed to keep Congress from doing its job the next day if it needed to and I don’t think that a majority (if living) would have given in, but maybe the plan was to have a long-run standoff like at Waco.

Since Trump and Pence’s terms would have ended on the 20th anyway, this would not have kept them in office.  But if the insurrectionists had killed the Speaker and managed to keep Congress from meeting elsewhere and selecting a new Speaker, then presumably Chuck Grassley, the President Pro Tempore of the Senate would have become President.  And we know what a profile in courage he is….

Everyone says it’s harder to get things done under COVID, so we’re extending the deadline for submission of paper abstracts to We Robot 2021 by one week – to midnight US East Coast time on February 8, 2021.

We will attempt to keep to the rest of the schedule, but paper acceptance notices may end up slightly delayed also.

Headline of the Day? 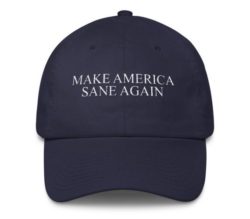 GOP: No ‘Unity’ So Long As Democrats Insist On Existing!

Kind of sums it up, really. (Article, alas, doesn’t say much you probably don’t already know.)

I’m home, having had a symptom-free period of ‘observation’ at the hospital. Lots of poking and prodding, stupid quizzes (yes, really), and bad food.

Happy to be out, but now I have a long period of strict quarantine — about 80 days — while we wait for my immune system to settle down. And we don’t even get to find out if the treatment worked for some time either.

A member of the ‘Sedition Caucus’ gets the ad he deserves: 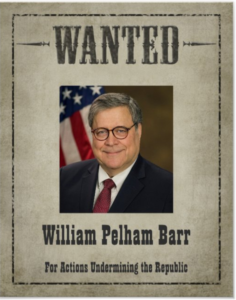