Not Panicking Yet (Tropical Storm Isaias)

Miami is hardened for wind. Most tropical storms just beat up vegetation and some power lines. You don’t want to be out walking or driving in it, and it makes some noise, but in most cases things are mostly OK the next morning. It’s when it gets to hurricane-force winds that I start to worry.

And hurricane force winds are a possibility here, although not it seems a strong possibility. 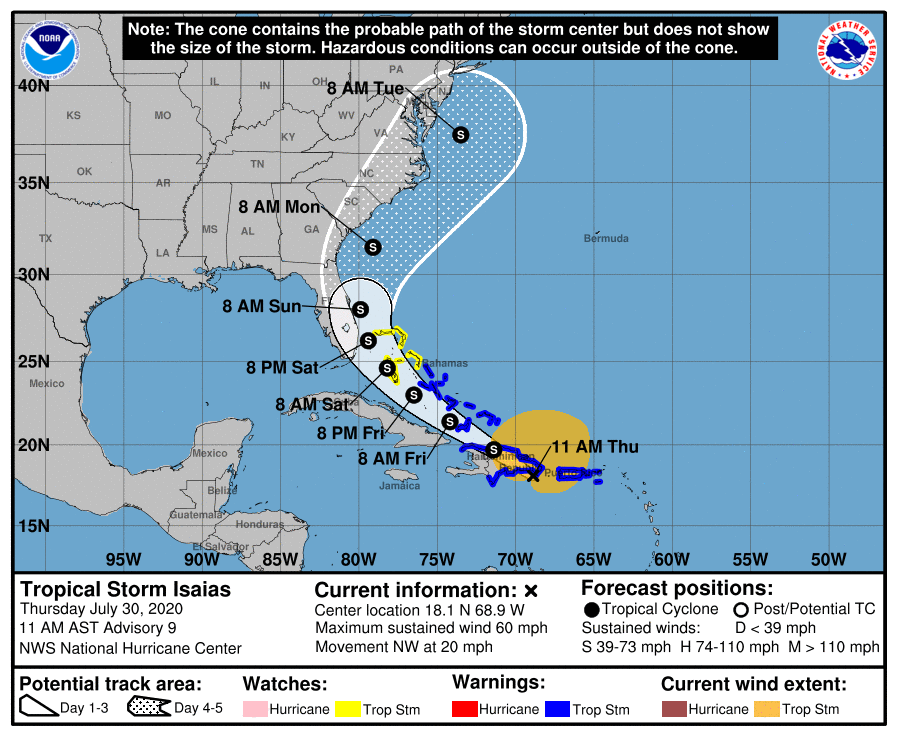 By late Friday, a mid-latitude trough moving into the east-central United States is expected to weaken the western portion of the ridge. This pattern should cause the cyclone to turn northwestward to north-northwestward on Saturday when it is near the northwestern Bahamas and South Florida. As the trough slides eastward over the United States, this should steer Isaias northward and northeastward early next week. Although the bulk of the track guidance agrees on this overall scenario, the confidence in the track forecast remains lower than usual due to the expected land interaction and possible center reformation in the short term. The new NHC track forecast is a blend of the HFIP corrected consensus and the TCVA multi-model consensus, and is similar to the previous advisory.

The intensity forecast remains challenging. The structure of the storm is likely to be disrupted by its passage near or over Hispaniola today, and some weakening is likely. Once the system moves away from the Greater Antilles gradual strengthening is anticipated. The global models and the SHIPS guidance suggest that Isaias will encounter an area of moderate southwesterly shear over the weekend, and the NHC intensity forecast is again leveled off at that time. There are models that continue to suggest Isaias could become a hurricane when it is near the U.S., but given the continued uncertainty, the NHC intensity forecast remains near the intensity consensus.

Also, the track has moved East some in the past day or two; that could continue too….

Of course, there’s a lot of food in the freezer right now, so it would be a lousy time to lose power.

This entry was posted in Weather With a Name. Bookmark the permalink.