If I had to bet, I’d bet that the Customs and Border Patrol is the paramilitary force most likely to become the modern Brown Shirts. They’re the only one with anything close to the numbers other than the armed services themselves, and they’re the ones with a toxic brew of resentment and racism ripe for exploitation by the ‘right’ sort of leadership.

First, the uniformed military. This is of course the largest and best-armed, group. If it decides to occupy the field, every other group on this list will get out of its way: The Pentagon has troops, tanks, attack helicopters, nukes even. But by and and large I’m not real worried about the military being deployed as a domestic occupation force; most of the services, the Air Force perhaps excepted, appear to have pretty strong cultures of non-partisanship that would make that unlikely except in a spot support role like when in in 1957 Eisenhower sent in 1,000 soldiers of the 327th Airborne Battle Group of the 101st Airborne Division to Little Rock to enforce school integration (recall that Governor Orval Faubus had deployed the Arkansas National Guard to support the segregationists).

That said, there are things that could give you pause.  One is the shameful role of the Chairman of the Joint Chiefs last night, Gen. Mark Milley, who chose to join Trump on his little jaunt across the street while in combat fatigues. In a hopeful sign Gen. Milley understands he went too far, he’s now trying to, er, walk it back.

Another is the culture of the Air Force (and perhaps its calf, the Space Force), which has become deeply sectarian; sectarianism certainly doesn’t equal willingness to trample protests, but it does signal a disinterest in Constitutional principles, which is a worry.

Another worrying thing, maybe the most worrying on this sub-list of caveats, is the latest report that military helicopters were deployed yesterday to fly low to ‘discourage’ protesters:

A Black Hawk helicopter, followed by a smaller medical evacuation helicopter, dropped to rooftop level with their search lights aimed at the crowd. Tree limbs snapped, nearly hitting several people. Signs were torn from the sides of buildings. Some protesters looked up, while others ran into doorways. The downward force of air from the rotors was deafening.

The helicopters were performing a “show of force” — a standard tactic used by military aircraft in combat zones to scatter insurgents. The maneuvers were personally directed by the highest echelons of the Washington National Guard, according to a military official with direct knowledge of the situation. The Guard did not respond to a request for comment.

That reportedly caused pushback from retired military leaders, and even rumblings in the ranks.

It’s maybe worth pointing out that the D.C. National Guard, which isn’t a very big force, is unique in that it reports to the President directly rather than to any Governor, due to Washington D.C.’s semi-colonial status. The Mayor of Washington D.C., its highest elected local official, is not in the Guard’s chain of command. Rather, at least according to Wikipedia,

The D.C. National Guard is the only U.S. military force empowered to carry out federal functions in a state or, in this case, a district. Those functions range from limited actions during non-emergency situations to full scale law enforcement of martial law when local law enforcement officials can no longer maintain civil control. The National Guard may be called into federal service in response to a call by the president or Congress.

When the D.C. National Guard is called to federal service, the president serves as commander-in-chief. The federal mission assigned to the U.S. National Guard is “To provide properly trained and equipped units for prompt mobilization for war, National emergency or as otherwise needed.”

Thus, the willingness to deploy the DC National Guard aggressively against civilians could be a tell for what is in store with more regular armed forces; on the other hand, orders to other military groups will have to go through a different chain of command. And they are busy signalling hard they have no appetite for it. Certainly, if I’m wrong in my cautious optimism about the fundamental character of our armed forces, we’re in a whole different space from the universe any of us are used to navigating.

Second on the list of armed feds are the CIA’s private armies. Who knows how many there are, where they are, what their nationalities are, what their missions are? All important questions, but for present purposes the key point is that they are abroad. Any attempt to bring one of these home would turn liberals into Second Amendment partisans (in both senses of that word). But it’s not going to happen.

Third — and where I was originally headed with all this before getting blown off course by the DC National Guard’s helicopters — a plethora of federal civilian police and paramilitary forces. There’s a list of agencies and units of agencies at Wikipedia but I doubt it’s complete. There’s a lot of these groups — the Bureau of Justice Statistics counted 83 a few years ago, but that number includes police forces in the military. Whatever the number, the key thing here is that in the grand scheme of things — occupying a big country — most of these groups are quite small. Indeed, four years ago (I can’t find better data), about two-thirds of the 100,000 armed civilian feds worked for one of four agencies: Customs and Border Protection (33%), the Federal Bureau of Prisons (14%) [see yesterday’s post], the FBI (10%), or Immigration and Customs Enforcement (9%).

I have never been a cheerleader for the FBI, but their training is light-years ahead of the CBP. 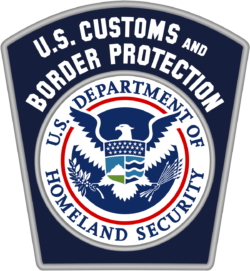 It’s the CBP that has the numbers, that has the recruiting crisis, that is losing the good officers and stuck with what’s left, that has disgusting bigoted secret social media groups, and a leadership notable for corruption, misconduct and a toxic culture. All of which makes a modern brownshirt movement all too easy to imagine. Please don’t misunderstand: I’m not saying it’s inevitable; I’m not giving odds. I’m just saying it’s something that has seemed like something worth watching out for pretty much since Trump got elected.

All this is context for what I find to be the disturbing news that Trump is sending the CBP into cities for counter-citizen activities. The head of the CBP, an ‘acting’ naturally so as to avoid the necessity of Senate confirmation, tweeted a picture of masses of uniformed CBP officers, stating

CBP personnel have deployed to the National Capital Region to assist law enforcement partners. These “protests” have devolved into chaos & acts of domestic terrorism by groups of radicals & agitators. @CBP is answering the call and will work to keep DC safe.

This “chaos … radicals & agitators” talk is brownshirt language. The implications were not lost on AOC who called it “dangerous”.

This entry was posted in Law: Constitutional Law. Bookmark the permalink.