Posted on February 18, 2020 by Michael Froomkin

…in a rational world, big Wall Street job cuts and the need for massive bailout money from the Fed would not correlate with a stock market regularly setting new highs. But Wall Street no longer exists in a rational universe. It exists in an alternative universe where Wall Street banks are allowed to put out a buy recommendation on a company and then trade its stock in their own Dark Pools; where trillions of dollars of risky stock derivatives are held by the country’s largest federally-insured bank; where initial public offerings of deeply indebted companies that have never made a dime of profits are hustled for listing on the nation’s stock exchanges; and where Wall Street is allowed by the U.S. Supreme Court to run a private justice system which draws an opaque curtain around the kinds of charges aggrieved investors are making against these Wall Street banks.

As we have stated previously, this is not so much a stock market as it is an institutionalized wealth transfer system moving money from the pockets of the 99 percent to the 1 percent who have concocted this market structure.

Millions of Americans are grappling with how to put food on their table while paying their 17 percent interest rate on their credit cards from these same Wall Street banks that are being provided loans from the New York Fed daily at 1.60 percent.

I started reading their blog because it seemed the most concerned by the strange doings in the repo market. The authors come off as a bit shrill, but there seems a lot to be shrill about — and even more to be deeply puzzled about, as this chart from Alhambra Investments shows: 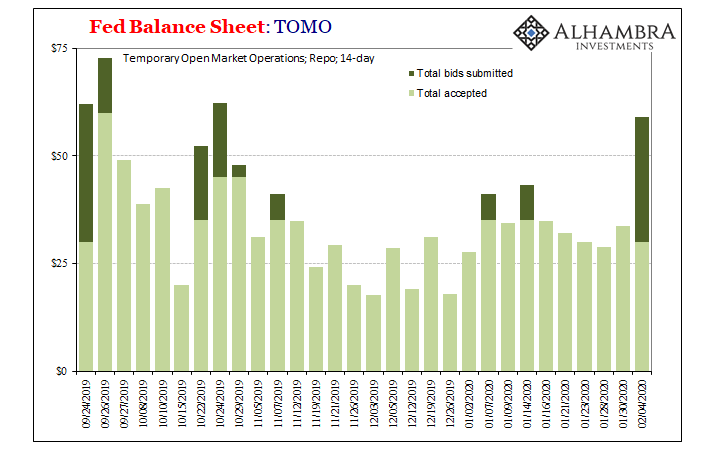 If you go back to early September 2019, the US government was buying no repos at all; it stepped in when the market liquidity vanished suddenly for still-unexplained reasons. And, at last, the Fed beginning, maybe, to extricate itself from being the repo market lender of first as well as last resort, so maybe this will just be another squall before the storm. Then, again, that dark part of the line to the right in the graph is people who wanted the fed to buy their repos (at a great price) but were unsatisfied. So extrication may not be easy unless those sellers can find a market-clearing price on the private exchanges.