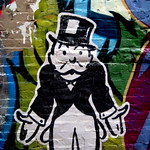 One of the striking features of the US economy is how much concentration we’ve allowed in major industries: national monopolies, regional monopolies (e.g. cable), oligopolies. Now come economists tying that trend to why raising the minimum wage doesn’t cause the job losses that micro-economics might predict: one of the things that makes market concentration profitable is that it allows firms to underpay workers (that is, pay them below their marginal productivity). So long as the raise in minimum wage doesn’t rise to a level exceeding the value of the work, businesses rationally decide to hold on to the workers.