Posted on November 2, 2019 by Michael Froomkin

Via the NYT’s Criticize Israel? For Democratic Voters, It’s Now Fair Game comes news of a study showing that Jews donating to a Democratic Presidential candidate gave most often to … Pete Buttigieg? 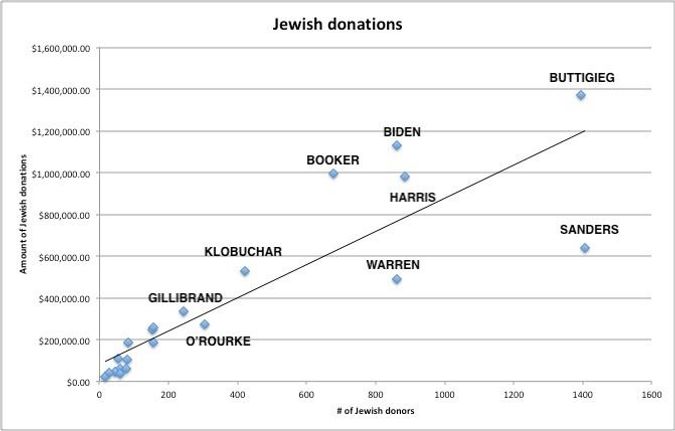 Source: Forward, Who Are Jews Backing In The Democratic Race? Hint: Not Bernie, Or Biden.

According to an analysis by The Forward, a Jewish publication, roughly 5.5 percent of all donors to Democratic presidential candidates in the first half of this year were Jewish, and they accounted for 7 percent of all funds given. (The Forward used several methods, including a research tool called the Distinctive Jewish Names list, to identify donors who were most likely Jewish in campaign finance reports.)

The Forward found that the Democratic presidential candidate receiving the most donations from Jewish backers this cycle has been Mr. Buttigieg, even as he has issued sharp critiques of Mr. Netanyahu.

“You can be committed to the U.S.-Israel alliance without being supportive of any individual choice by a right-wing government over there,” Mr. Buttigieg said at the J Street conference on Monday.

Mr. Sanders, who would become the country’s first Jewish president if elected, railed against giving “carte blanche to the Israeli government, or for that matter to any government at all.”

I find this surprising. And not because of his position on Israel, which doesn’t sound all that different from Sen. Warren’s or even Sen. Sanders’s, it’s just he seems, for all his undeniable linguistic virtuosity, to be willing to oppose progressive ideas …and relatively unprepared for the national and international aspects of the job compared to all the candidates who have held federal office.

This entry was posted in 2020 Election. Bookmark the permalink.