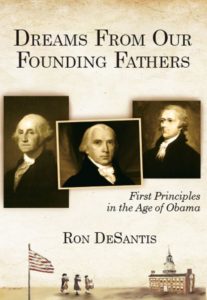 Florida gubernatorial candidate Ron DeSantis’ 2011 tome, Dreams From Our Founding Fathers, is terrible. It’s a book-long screed from the then-Tea Party candidate, in which DeSantis screams at President Barack Obama for 286 pages, implies he is a closet Marxist, and at one point writes that Obama has “Muslim roots.” The book sucks because it is an absolute slog. New Times combed through huge portions of DeSantis’ repetitive, banal, witless, and crushingly pedestrian prose, and the project reads like a book report from a dying Confederate soldier trying to get a community college poli-sci degree.

But, more important, the book sucks because parts of it are pretty offensive to black people, Muslims, and women. DeSantis’ book includes justifications excusing the legalization of slavery in the U.S. Constitution, as well as repeated complaints about policies designed to protect women from rape and domestic violence.

New Times sources the discovery to American Bridges, an advocacy group, but I couldn’t find the report on their site.

This entry was posted in 2018 Election. Bookmark the permalink.