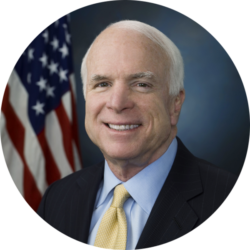 John McCain was a mercurial figure, a genuine hero with at least one foot of clay. He was on the whole a very right-wing figure in US politics for about 35 years, but he had very important flashes of independence on some issues, including critically the Affordable Care Act which he consistently voted against — until he (literally) single-handedly saved it from repeal. At times he said just the right thing (rebuking a voter who said Obama was a frightening figure, an Arab); at times he took the low road, or, let ambition rule him on the campaign trail — although he himself later repented for one such “act of cowardice” and others, like Mike Huckabee, were much worse.

It’s worth remembering also, as Juan Cole reminds us in That Time the Republican Party Made McCain Black to Defeat his Presidential Bid, that long before Trump, key establishment figures in the GOP were race-baiting away. Nixon started the ‘southern strategy’; Reagan and Bush followed him through the electoral trail blazed by Roger Ailes and Karl Rove. In the long view, Trump is a culmination not an aberration, and McCain, for all his faults, is not simply the road not taken but a road that racial politics and demographics foreclosed.

McCain’s life had many fine moments, and his passing is a time to celebrate those while noting that the flawed vessels (which we all are) can contain greatness. Heroism in captivity trumps terrible carelessness as an aviator, and fed a consistent opposition to torture. McCain was (usually) anti-racist; he and his wife adopted a child from Bangladesh, leading to Rovian suggestions that McCain had fathered a Black child.

McCain’s selection of Sarah Palin for his vice-presidential running mate was irresponsible (another case of ambition and, here, desperation, displacing statesmanship), and in the view of some caused long-term harm by emboldening the know-nothing wing of the Republican party (I don’t much agree, I see it more as reflection than cause, as that wing was taking over anyway). But McCain’s concession speech when he lost the election to Barack Obama in 2008 was more than civil: the speech was noble in a way that now seems to belong to another age, and in a sign of things to come was greeted with boos initially by its Republican audience:

My friends, we have come to the end of a long journey. The American people have spoken, and they have spoken clearly. A little while ago, I had the honor of calling Sen. Barack Obama — to congratulate him on being elected the next president of the country that we both love.

In a contest as long and difficult as this campaign has been, his success alone commands my respect for his ability and perseverance. But that he managed to do so by inspiring the hopes of so many millions of Americans, who had once wrongly believed that they had little at stake or little influence in the election of an American president, is something I deeply admire and commend him for achieving.

This is an historic election, and I recognize the special significance it has for African-Americans and for the special pride that must be theirs tonight.

I’ve always believed that America offers opportunities to all who have the industry and will to seize it. Sen. Obama believes that, too. But we both recognize that though we have come a long way from the old injustices that once stained our nation’s reputation and denied some Americans the full blessings of American citizenship, the memory of them still had the power to wound.

A century ago, President Theodore Roosevelt’s invitation of Booker T. Washington to visit — to dine at the White House — was taken as an outrage in many quarters. America today is a world away from the cruel and prideful bigotry of that time. There is no better evidence of this than the election of an African-American to the presidency of the United States. Let there be no reason now for any American to fail to cherish their citizenship in this, the greatest nation on Earth.

Sen. Obama has achieved a great thing for himself and for his country. I applaud him for it, and offer my sincere sympathy that his beloved grandmother did not live to see this day — though our faith assures us she is at rest in the presence of her Creator and so very proud of the good man she helped raise.

Sen. Obama and I have had and argued our differences, and he has prevailed. No doubt many of those differences remain. These are difficult times for our country, and I pledge to him tonight to do all in my power to help him lead us through the many challenges we face.

I urge all Americans who supported me to join me in not just congratulating him, but offering our next president our goodwill and earnest effort to find ways to come together, to find the necessary compromises, to bridge our differences and help restore our prosperity, defend our security in a dangerous world, and leave our children and grandchildren a stronger, better country than we inherited.

Whatever our differences, we are fellow Americans. And please believe me when I say no association has ever meant more to me than that.

It is natural tonight to feel some disappointment, but tomorrow we must move beyond it and work together to get our country moving again. …

This entry was posted in Politics. Bookmark the permalink.