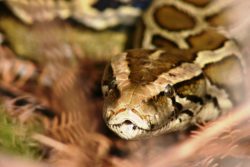 One of the, er, joys of living in South Florida is that some of the flora looks like it wants to eat you, and some of the fauna actually would be very happy to do so. Much of that fauna is indigenous — alligators, crocodiles, scorpions (non-fatal, I’m so relived), spiders, and a zillion other bugs, some of which carry Zika — but some like lionfish and pythons are imports, just like most of the people.

Turns out that the pythons — which get big enough to eat deer and alligators — are not just invaders, they’re hybridizing:

… a study from the U.S. Geological Survey (USGS) released Tuesday sheds light on why the reptiles have adapted so well to the River of Grass: Some are not full-bred Burmese pythons. Instead, the study suggests a portion of the snake invaders are a cross between the Burmese (Python bivittatus) and its close cousin, the Indian python (Python molurus).

Sooo happy to learn that the new cross-breeds have “hybrid vigor” and are just as happy on dry land as in swamps.

And waiting in the wings: Meat-eating tegu lizards and invasive “super termites”.