GablesStage has a terrific production on of Bruce Graham’s ‘White Guy on the Bus’. It has many moments of brutal truth about race relations, and some nicely abrupt surprises that I don’t want to ruin.

At the start of the play we meet suburbanites Ray (Christopher is getting ready to defend his thesis. But he’s worried that he might run into a buzz-saw of political correctness, although the topic doesn’t sound terriblly controversial to my perhaps jaded ear and he certainly sounds well-prepared. Molly, whom Ray and Rox find a bit naive, teaches in a ‘nice’ school and starts the play as the least-defined character, perhaps because we’re seeing things more from Ray’s and Rox’s perspective, and they’ve known Matthew since he was four.

There’s a key fifth character, Black bus-rider Shatique (Rita Joe), to whom Ray is the ‘white guy on the bus’. Ray strikes up a conversation. Shatique is spending all day working and studying to become a nurse; she sees her son only once a week because he lives with her mother in a safer neighborhood. Shatique is understandably puzzled as to why a white guy in a suit and tie is on a bus — and especially this bus. And that turns out to be a good question.

The play starts out a bit preachy-sounding, but that is as much misdirection as prelude. Everyone is going to have their balloons punctured by the end. Or worse. 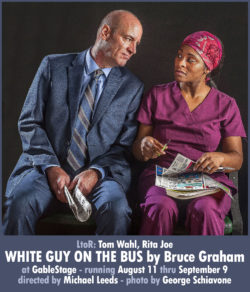 , making this a rare GablesStage production not directed by Joseph Adler — who no doubt has his hands full trying to get GablesStage relocated to a rehabbed Coconut Grove Playhouse. Leeds gets great performances out of all his cast, particularly Wahl, Joe, and Matthews.

GablesStage always has great sets (blame Lyle Baskin). This one, which allows for seamless (indeed overlapping) transitions between scenes works particularly well to serve the plot twists in the play.

That this play shines light in dark places can’t be denied. But if it has a moral other than ‘race relations are ugly, life is complicated, brutal, and a lot of things suck’ it was kind of lost on me. Do any of the characters get what they originally wanted? Maybe, but to the extent some do it is certainly safe to say that not one gets anything they want — or later decides to want — in any way they possibly could have wanted. This is not uplifting theater, and the only truck it has with easy answers is to stomp on them very hard. This play doesn’t sugarcoat. But is a really good production of a smart play — one that notably does not suffer from the second act letdown that can infect the kind of small cast plays that find their way to the little stage in the Biltmore.

If you like good theater, go see it and support what has to be one of the best regional theaters in the country. The run is until Sept. 9, and there are student tickets for some shows.

This entry was posted in Coral Gables, Kultcha. Bookmark the permalink.