Posted on November 21, 2016 by Michael Froomkin 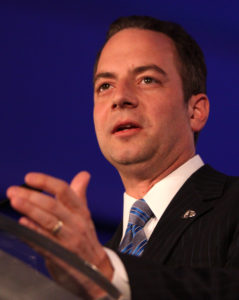 UM Law alumnus Reince Priebus profiled in NYT Mag as Reince Priebus, Normalizer in Chief and in Miami Herald puff, Before making his name in politics, Priebus was a force at Miami law school . The Herald article includes this:

Without exception, more than half a dozen people interviewed for this story who knew Priebus during law school described him as affable, thoughtful and kind.

Andrew Moss, who was in the same first-year section as Priebus, recounted to a Miami Herald reporter an anecdote about going to grab a bite at Wendy’s with Priebus when they were working on a project. A homeless man lay outside. Priebus didn’t have much money, Moss said, but he bought two meals and gave one to the man.

Say what you will, he’s Trump’s least crazy appointee so far — by several miles.  Whether he’ll have actual power with alt-right Bannon down the hall remains to be seen.

This entry was posted in Trump, U.Miami. Bookmark the permalink.

4 Responses to Root for Reince