Jill Stein is Not the Answer (Especially in Florida!)

Posted on September 21, 2016 by Michael Froomkin

Commentator “How” (I still have commentators?)  may or may not be a Republican plant.  I prefer to assume he or she is not, and thus thought I would write a reply to this recent contribution

Though I would never vote for Clinton, and was a strong supporter of Obama, recent endorsements of Clinton my Wolfowitz, the Bushes etc. make me more disgusted with Hillary. Voting green party again here in FL. My husband and I will be moving to SE asia to become kind of global nomads for the next few years – so luckily we won’t be paying much attention hillary or trump for he next few years. Honestly, I see trump winning this – I see Hillary setting up Assad as another Saddam Hussein – she clearly hasn’t learned her lesson. I hope Trump wins to shake things up – no matter how bad things may get. The US can’t continue on the same path of foreign policy w/ regards to Yemen, Iran, Palestine, Saudi Arabia etc… and Clinton represents more of same.

This is pretty wrong-headed stuff. The first thing is that in a competitive state like Florida, a vote for Stein is a vote for Trump. Saying you think he’ll win anyway only underscores the gravity of the decision.

Saying, ‘I’m going abroad suckers enjoy the mess I’m leaving behind’ does not come off as terrible endearing. Nor is it terribly smart, since for better or worse a US President’s decisions have repercussions pretty much everywhere.

But the biggest thing wrong here may be thinking that Jill Stein deserves your vote. Frankly, she’s doesn’t. If not directly an anti-vaxxer, she’s certainly happy to dog whistle to them. But the main thing is that this isn’t an ordinary election. 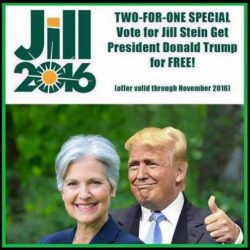 I think it’s unfair to equate Hillary Clinton with the Bushes. She’s much more progressive on domestic issues other than perhaps finance-related ones – which is to say she’s going to be good on health care, student aid, women’s rights, the environment, global warming. She will appoint much more progressive judges. Squishy as she is on terrorism/civil liberties she is no worse, and maybe a hair better than Obama. It’s only on foreign policy that she looks bad. Even there, however, one might ask whether Trump is more likely to start more wars directly, and especially cause more indirectly as a result of the chaos he would spill across the international stage.

You think Hilary’s foreign policy advisers and endorsers are bad? Have you seen who is behind Trump? Not to mention that he makes a loose cannon look moderate.

Last, but not least, it’s not worth throwing away the next three Supreme Court appointments.

Of course, “How” also says s/he voted Green before Obama ran — which means that his or her Nader vote helped elect George W. And how did that work out for you? Or most everyone else in the world?

41 Responses to Jill Stein is Not the Answer (Especially in Florida!)