Posted on September 21, 2015 by Michael Froomkin 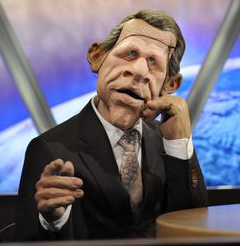 Les Guignols de l’info are being destroyed (or if you prefer, decapitated) by the new owner of Canal+ the French cable network. According to Le Parisien, “Canal + : «Les Guignols» décapités, les auteurs historiques virés” the network fired the four long-standing members of the writing team. After many years of being broadcast in the the clear, whatever is left of the show will now appear behind a subscribers-only crypto wall for TV watchers; Canal+ has also stopped adding to the portal for internet users.

Supposedly there will be clips on Daily Motion somewhere, but I didn’t find much recent stuff when I looked just now.

This will degrade my ongoing knowledge of French politics by at least 50%, and — even more serious — remove a decent chunk of my video comedy diet. Plus it was my main source of new French slang.

This entry was posted in Completely Different, Politics: International. Bookmark the permalink.