The Coral Gables Commission Election is tomorrow. Many will have voted by absentee, but some us insist on voting in person.

The mud is certainly starting to fly. Mayoral candidate Ralph Cabrera filed an ethics complaint alleging that “staffers from Mayor Cason’s political campaign are holding themselves out to be agents of the city and are actively identifying constituent complaints and then using the Mayor’s public office to generate official action by the Coral Gables Public Works Department in an effort to garner votes.” The Herald article reporting the comlaint also notes the creative math that Cason used to calculate he’d been to 5100+ “events” as Mayor — turns out that includes meetings in his office — including meetings with City staff!!! Couldn’t Cason at least lie better?

The family mailbox continues to be filled with all sort of mailers, many of them negative. (For an earlier installment see Tis the Season…For Negative and Misleading Campaigning.) Some of these have been fair or nearly fair (and signed by opposing candidates), some very unfair. Let’s start with the unfair ones (click on any photo for a bigger version).

This arrived a couple of days ago, while I was out of town: 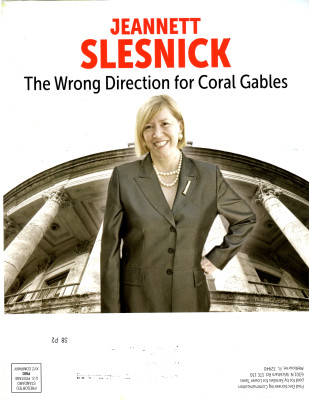 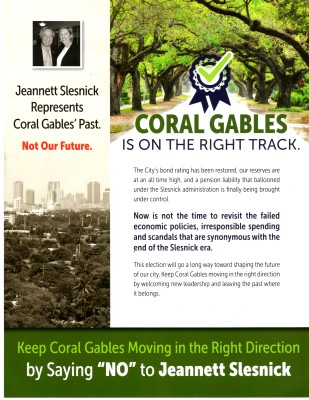 In addition to being a vague slur and guilt-by-association, whoever mailed this lacks the guts to identify themselves, hiding behind “Families for Lower Taxes,” a committee whose name tells us nothing about who paid for it.

The one that came today from the same people is even worse, as it tries to paint Slesnick as a pro-development candidate. This is, you may recall, the same Jeannett Slesnick who ran the GGG and through it is more responsible than anyone else for sounding the alarm on the development explosion that is going to reshape Coral Gables.  This is simply sleazy; it’s Rovian — trying to paint your faults on your opponent: 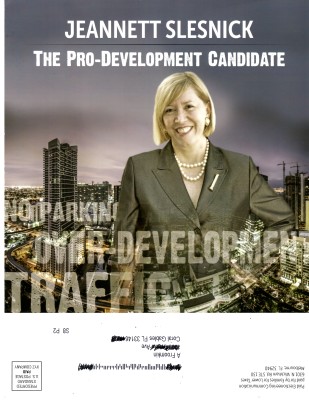 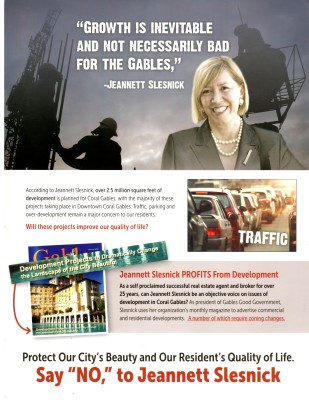 It’s possible to do negative right.

This one is not only visually appealing, it seems almost fair; unfortunately it’s also from a shadowy committee called “Coral Gables Deserves Better Now!”: 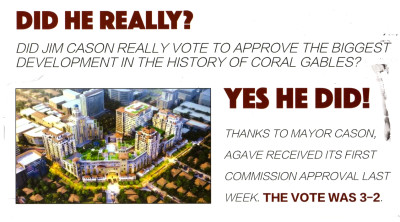 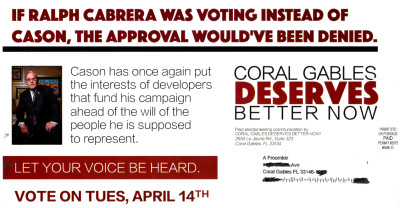 One might take issue with the sellout part — I’d bet Cason believes that growing the tax base is more important than the contrary issues, and there’s at least some merit to that view.

I’m a little less OK with the next mailer from the Cabrera people because I think calling the buildings “skyscrapers” is pushing things quite a bit, but Cabrera gets points for signing the mailer. 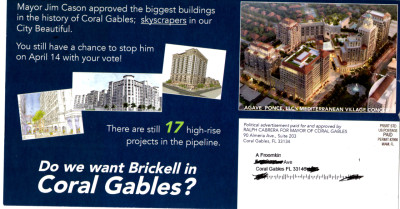 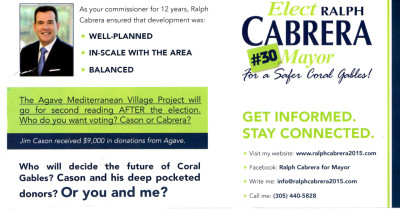 Lastly we have the model negative mailer, from PJ Mitchell: 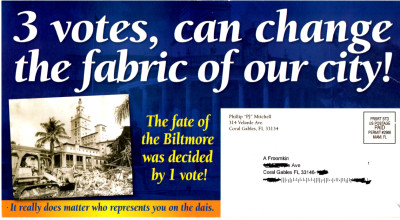 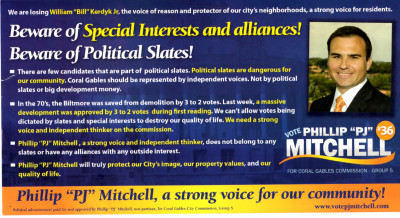 If you’re going to go negative at all, that’s a pretty good way to do it.

3 Responses to Right and Wrong Way to Go Negative