Do You Think I Look Short in this Photo? 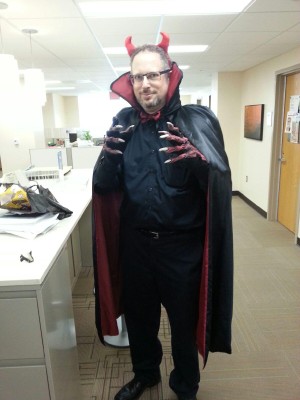 Every Law Student (and Many Lawyers) Should Read This

Just in Time for Halloween

The AAUP Chapter at Cleveland-Marshall College of Law has filed an unfair labor practice charge with the State of Ohio alleging that the law school retaliated against certain faculty in the award of merit raises in 2013 and 2014 because of their union activities. Faculty were placed in four merit raise bands — $5,000, $3,000, $666, and $0 — based on scholarship and scholarly influence (40%), teaching as measured by student evaluations (40%), and service (20%). The complaint alleges that eight AAUP organizers received raises of $0 or $666, despite “exemplary scholarship and teaching scores.” The complaint charges that the $666 raise in effect calls “AAUP’s organizers and AAUP Satan.” In a memo distributed to the central administration and copied to the entire faculty, one of the eight AAUP organizers alleges that:

[The $666 figure] is a universally understood symbol of the Antichrist or Devil — one of our culture’s most violent religious images. Implicitly, but unmistakably and obviously intentionally, [the Dean] used his powers to set faculty salaries as an occasion to brand his perceived opponents as the Antichrist.

The mind boggles. Although a $5000 merit band doesn’t sound bad at all in this economy.

Dan Froomkin is a veteran journalist who has received national acclaim for his writing about U.S. politics and media coverage. He’s been particularly focused on the issue of journalistic accountability – i.e. correcting misinformation, asking critical questions, and holding those in power accountable to their actions.

He was preparing to launch a website called FearlessMedia.org when we approached him about working with us. Before that, he was senior Washington correspondent and Washington bureau chief for The Huffington Post. During 12 years working for The Washington Post, he spent three as editor and six as the writer of the popular and controversial White House Watch column. Dan has also worked since 2004 for the Nieman Foundation for Journalism at Harvard, most of that time as deputy editor of the NiemanWatchdog.org website.

No word yet on what they are going to be calling it.

I’m very optimistic about the product given the team.

Myself, I thought Keller was losing, but just on points, until he first knocked himself down by defending the NYT’s failure to call torture “torture” when the US government does it. Then he finished the self-TKO by defending David Brooks…

I want my new media!

Here, by the way, is another take on how to read the debate: Marcy Wheeler (emptywheel), The Institutional Subjectivity of the White Affluent US Nation.

Moving Targets is a new blog by my colleague Mary Anne Franks. It has a very austere design, but the contents are fiery.

Some of my students were telling me today of what they called an “epic takedown” of an idiot on TV yesterday; you can see links and aftershocks to what I presume is the same event (could there be two in one week?) on her blog (Part 1, Part II).