Posted on August 1, 2012 by Michael Froomkin 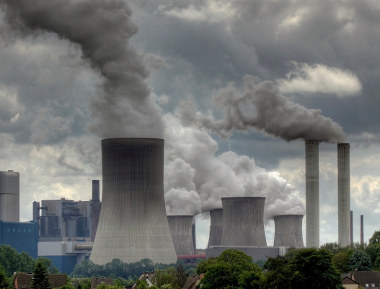 One obvious lesson of Muller’s study is that coal should be banned immediately and its mining and distribution should be criminalized. We put people in prison for a little pot, but let the coal industry destroy the earth. A few brave souls are protesting environmentally destructive ways of mining coal. But we should all be protesting the poisonous stuff itself.

The other obvious lesson is that we need a global Manhattan project to move to clean energy immediately. We don’t have much time. Carbon dioxide emissions were up 6% last year. Massive government-funded research and tax breaks could bring down costs of solar and wind quickly and make geothermal more practical. We need to redo the national electricity grid and put hydropumps in hilly or mountainous regions to keep solar- and wind-generated energy flowing during down times. This task has to be our number one priority, more important than fighting a small terrorist organization in distant lands, more important than spending 20 times on the war industries what our closest ally does, more important that imprisoning people for a few tokes, more important than tax breaks for the wealthy, more important than reproductive issues. Our Congress is a latter-day Nero, fiddling while the world burns, and any of them that doesn’t get it should be turned out in November if you care about the fate of your children and grandchildren.

Politically, there’s no chance of this in the US, much less in China. But Cole thinks he has anticipated one objection:

By the way, there are only 80,000 workers employed in coal mining in the US. There are 100,000 workers in solar energy and a similar number in wind. I suspect West Virginia and western Pennsylvania could have a lot of jobs in wind turbines, and those states and the federal government should help brave coal workers make the transition.

(Of course there will be more jobs in downstream occupations, and the disruptive cost of closing power plants and industries dependent on coal will be much larger still, so this number is I fear a gross understatement. And there would be the short-term competitive trade consequences of unilateralism…maybe balanced out by long-term gains from new technology leadership, but maybe not.)

It is also possible to fantasize about energy as the economy-saving alien invasion Paul Krugman wants us to imagine, and Cole takes us there:

Ronald Reagan used to fantasize that an alien invasion could unite human beings across capitalist and communist systems. Well, Reaganites now have their chance: Climate Change is a kind of alien invasion, threatening the human species, and here is an opportunity to put aside differences and unite to meet the biggest challenge we have faced in our 150,000 years of existence as homo sapiens sapiens.

On the other hand, this administration, at least, has demonstrated an unerring ability for letting good crises go to waste.

The latest climate change data are scary. It now seems highly likely that unless we bend the curve somehow, maybe Right Now, very bad changes will happen in the medium to long term. Certainly in my children’s’ lifetime; whether in mine is less clear. But the odds are that nothing radical will happen next year, which given our short-termism means the panic button remains out of reach.

In that context, Cole’s coal take feels wildly excessive. But it does raise the question: Is it time to be shrill? Is there any other way to move the Overton window on climate change? And do I have the, er, energy to participate in trying?

This entry was posted in Global Warming. Bookmark the permalink.

2 Responses to Coal as Contraband?