Posted on December 31, 2010 by Michael Froomkin

George Bush issued a secret order authorizing Presidential assassinations of U.S. citizens abroad whom the US unilaterally decided were Terrorists.

Oh. Wait. That wasn’t G.W. Bush. It was B.H. Obama who is authorizing murder without trial of US citizens abroad — and not on some battlefield either. 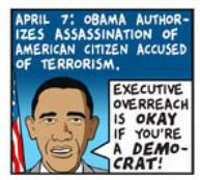 [Original draft 1/27/10.  In preparation for my blog redesign, I found draft blog posts that somehow never made it to publication. This is one of them.]

2010: Since I first wrote the above, the Obama administration successfully fought off a court challenge to its citizen assassination policy, on the grounds that the suit could not be brought by the future victim’s father, but rather required the targeted American to file it himself–an action that would inevitably put him at severe risk of capture and at least Padilla-like confinement if not death.  Happy New Year.

This entry was posted in Law: Constitutional Law. Bookmark the permalink.

3 Responses to Our Hero