Annette Taddeo was just on a panel at Netroots Nation, being showcased as one of four 'Future Leaders'. 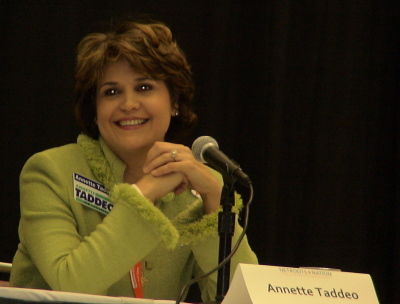 Watching her and her staff work the conference, I've been impressed by the organization and discipline (and advance preparation) of her campaign.

Really, the only thing that worries me about Ms. Taddeo is that left to herself, she comes across as really nice. She's great at showing how deeply she cares about the terrible things that the GOP has been doing to us. And she presents as very smart too. Given her personal history as a successful businessperson, and the well-oiled campaign organization she's building, there's undoubtedly a lot of steel magnolia in there, and I think to win against an entrenched incumbent we may need to see a bit more of it, more consistently. (The problem with Rep. Ros-Lehtinen is more than “a lack of leadership”.)

Interestingly, the sharpness comes up more in the Q&A then when she does her set-pieces. Then she not only presents as well-informed, but can toss off the sharp soundbite.

My favorite was when she was asked if she's helped by having Obama on the ticket. Ms. Taddeo responded that “I'm a non-Cuban Hispanic Jewish American” and suggested that having her on the ticket she helped Obama with turnout in key groups too — in a region where he has to win big if he wants to carry the state of Florida. “I can be really helpful to Obama, and wish that some of the donors would see that and be helpful to me.”

Another great zinger was when Ms. Taddeo noted that her opponent voted for DOMA (the so-called 'Defense of Marriage Act') which prevents the federal government from recognizing a state's gay marriage, or from allowing gay couples to enjoy married couple's benefits such as in social security. Voters in Florida think their representative supports gay rights, Taddeo said, but in fact she doesn't.

And it got better — Taddeo noted that her opponent spoke eloquently against torture when it was done to Cubans but accepts it now. And then better – Taddeo did a great riff on how Ros-Lehtinen loves to try to look like a Democrat and — now that she has a real opponent — has even been forced to vote with Democrats a couple times.

I came away thinking, “You know, she's getting good at this.”

PS. The other three candidates on the panel were genuinely impressive too, but I especially liked Jim Himes from CT-04, who I hadn't seen before.

2 Responses to NN08: Annette Taddeo Is a ‘Future Leader’