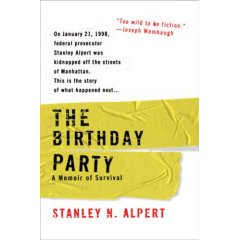 I read a lot of non-fiction in my job, so when I read for fun, I almost invariably choose fiction. And mostly pretty light fiction at that — although I don't as a rule read mysteries or crime fiction. And if I read non-fiction, it's mostly about contemporary politics.

But this weekend I read a really gripping piece of crime non-fiction that isn't political. It's The Birthday Party: A Memoir of Survival by Stanley N. Alpert. This is not a work of literary genius, but rather the harrowing true-life story of an Assistant U.S. Attorney who got snatched off the street one evening in Manhattan by a group of thugs. They wanted money from his ATM, but when they learned the size of his bank account, the mugging turned into a kidnapping, and an ordeal that he survived thanks to luck and amazing sang-froid.

Although blindfolded for most of his captivity, Mr. Alpert did so good job of figuring out details about his captors and the place that they held him that when, after his release, Mr. Alpert went to the cops they at first figured he was making it all up.