Where to Get Your Donuts in Ohio

There are not that many Froomkins in the USA: Indeed, I recall going to an exhibit of a Social Security computer as a kid in the late 70s, where you could run your surname through the system and find out how many SSNs had been issued to people with the same name, and the total was something like 17. (That doesn't count alternate spellings, of which there are many, for what is basically a transliteration from Russian.)

Over at froomkin.com we've collected the information we could about Froomkins 'round the world, and it's not a long list.

What are the odds, therefore, that there would be two people named “Michael Froomkin”1? And that the other one would make the best donuts in Ohio? In 54 varieties?

No one makes creme sticks like the Froomkins, loyal customers insist. 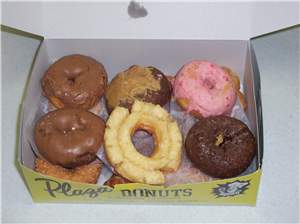 Michael Froomkin, president of the company and son of co-founder Berkeley Froomkin, acknowledges that health concerns have hurt business over the years but he can’t say how much.

“People still like doughnuts,” he observes. “Doughnuts are still a staple breakfast item.”

Plaza Donuts, founded by brothers Irv and Berkeley Froomkin, who operated three Youngstown coal yards, opened its first store in Akron. Two years later Plaza opened its second store in Sharon, Pa., and 1963, the company opened its store in Liberty — still operating today and where its business offices are located. Of the first three stores, it’s the only one still operating. The other four are in Boardman, Girard, Niles and downtown Youngstown; all are supplied from the Liberty bakery.

The business remains a family affair. Irv’s sons, Craig and Howard, serve as vice president and secretary-treasurer, respectively. From time to time, both founders come in to help out, Froomkin says.

1 OK, technically “Michael” is my middle name, but despite naming me “Andrew” my parents (and everyone else) have called me “Michael” since I was born. Go figure.

I was forced to throw in the “A.” when the nice people at the DC Motor Vehicles Office refused to give me a driver's license in a name that differed from y birth certificate; then I needed a signature on checks that matched by driver's license…

And indeed, it seems I'm just “a” Michael Froomkin instead of “the” only one.

This entry was posted in Personal. Bookmark the permalink.

2 Responses to Where to Get Your Donuts in Ohio