On Teaching From Badly Written Cases

Posted on November 20, 2012 by Michael Froomkin

[Occasionally I resurrect a draft blog post that somehow never made it to publication when I first wrote it. This is one of them.]

C.E. Petit, he of Scrivner's Error, pens (?) a rant about the poor state of legal writing amidst law graduates:

Yet another set of law school deans wrings its collective hands over law schools' failure to teach writing skills sufficient for lawyers to survive in practice. The problem is that it really is the deans' fault…

Among his targets, Mr. Petit would blame the judiciary, for writing so poorly, and the legal academy for inflicting generations of judicial butchery of the English language upon the poor unsuspecting 1Ls, 2Ls, and 3Ls.

While admitting there is a legal writing problem, as a law professor engaged, so it seems, in corrupting the keyboards of the young, I would like to plead justification (necessity).

Mr. Petit proffers a solution to the bad-legal-writing problem:

Perhaps most important of all, the deans need to trash virtually every casebook currently in use. The biggest problem with legal writing is that law students see mostly examples of bad (or worse) legal writing in the bulk of their classwork, particularly in the common law courses. In Contracts, students study Sherwood v. Walker exhaustively, and still can't figure out what the holding is because the judge couldn't bloody write (even by nineteenth century standards in Michigan); in Property, even the casebooks try (ineptly, with one exception) to make head or tail of the actual ruling in Shelley's Case; in Torts, the string of double negatives (which can be helpful rhetorical devices when used sparingly, but not in a string) in the leading cases on product/strict liability causes more confusion than anything in the discussion over comparative/contributory negligence; and in Criminal Law, just try reading M'Naghten's Case. More casebooks need to follow the path that Professor LaFave did in Criminal Procedure: Clear, concise summaries, supplemented by extended quotations where helpful… and that California's Justice Mosk did in establishing the concept of comparative negligence by writing more simply and more clearly than did the advocates of the contributory negligence system.

I think this is mostly wrong. There is real value in teaching from real cases, without potted summaries, even (especially?) the badly written ones. This is the reality of law practice: Judges often write badly. (I have said this for years: see my Legal Writing Tips.) Lawyers need to know how to decipher bad judicial prose. Meaning-extraction (or even and especially meaning-creation) is an important legal skill we work hard to impart to our students. How will they learn whether to appeal a badly written case except by struggling with its ancestors?

In addition, students need to know the big cases. Even if they are badly written, that doesn't detract from the leading cases' importance. A student who knows her way around the original has an advantage over someone who just learned from a summary.

I agree that it is hard to first show students precedents — some eloquent and many ham-handed — tell them the cases matter, sometimes matter a great deal, and then in the next breath ask students not to write as badly as those very judges whose torturous prose we've force-fed them, but those are the cards lawyers are dealt. Those cases are real. They have authority. They must be confronted and dissected, even if that carries risk of their being emulated.

I Don’t Think So 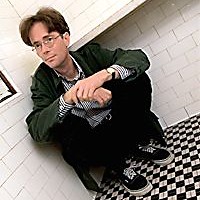 Not that I’d mind, but I don’t think so.

The chief instigator of the “cyberpunk” wave of the 1980s, his razzle-dazzle futuristic intrigues were, for a while, the most imitated work in science fiction.

Which science fiction writer are you?

[Original draft 2/13/2008. In preparation for my blog redesign, I went through draft blog posts that somehow never made it to publication. This is one of them.]

The Sotto Voce of Experience

Seth Grodin writes about Getting serious about your meeting problem:

If you’re serious about solving your meeting problem, getting things done and saving time, try this for one week. If it doesn’t work, I ll be happy to give you a full refund.

Even though I have some fear the results could be disastrous, I would love to try this at faculty meetings.

[In preparing for my blog redesign, I found draft blog posts that somehow never made it to publication. This is one of them. Original draft 3/26/2009, but this one is timeless.]

2011: The pedant in me wants to know how someone can be “more than two minutes later than the last person to the meeting” other than by being the only person who doesn’t  turn up at all.

Posted on January 5, 2011 by Michael Froomkin

According to the Australian newspaper article where I got this picture, it is a “Right Brain vs Left Brain test,”

do you see the dancer turning clockwise or anti-clockwise?

If clockwise, then you use more of the right side of the brain and vice versa.

I’m a little dubious, because it doesn’t explain the mechanism, and I think most people who know me would say I’m very thoroughly left-brained. But I saw the figure turning clockwise.

Focusing didn’t change that. Shaking my head up and down like a raving loony got me to a point where the dancer seemed to be flipping back and forth and then briefly counter-clockwise, before reverting to clockwise.

[Original draft 1/19/2009.  In preparation for my blog redesign, I found draft blog posts that somehow never made it to publication. This is one of them.]

Posted on January 3, 2011 by Michael Froomkin

Orin Kerr points us to an article at law.com:

In a pact brokered by the New York County Lawyers’ Association, more than 60 law firms have agreed to tell their corporate clients the composition of assigned legal teams by race, gender, ethnicity and sexual preference.

For several years, clients have asked law firms to sign statements in support of diversifying the legal profession. But with the formal agreement, firms have volunteered to put hard numbers behind their noble aspirations. According to the pact, “law firms should not object to requests by their corporate clients [to] report the number of hours devoted to the clients’ matters by minority lawyers.”

It’s nice that clients don’t want to employ either bigots or those who, even by lack of effort, have failed to overcome a legacy of discrimination.

But immediate consequences are clear, said Robert L. Haig, a partner at Kelley, Drye & Warren, one of the first large Manhattan firms to sign the agreement.

“When that number is put on the table and it’s a small number, then the great enthusiasm for diversity is a little suspect. The client might say, ‘We can’t hire you for the following year,’” Haig said in an interview. “Right then, that law firm is going to change. They’re going to do what they have to do in order to be retained again and again.”

He added, “This is economically driven, and that’s what makes it powerful.”

Haig, a former president of County Lawyers, the nation’s first bar association to admit minority attorneys, was one of about 30 attorneys who formed a County Lawyers task force on diversity. The effort was launched in 2000 and headed by Juanita Bing Newton, administrative judge of New York City Criminal Court and deputy chief administrative judge for Justice Initiatives at the Office of Court Administration.

But suppose the shoe were on the other foot? What if the clients wanted low numbers of minorities? Then we’d all be revolted. The parallel is far from perfect: excluding minorities is illegal and immoral; demanding their inclusion is legal and praiseworthy. But is the mechanism appropriate?  In general I’m in favor of people voting with their buying dollar to support suppliers whose values they share, and to avoid sellers with bad values even when they have good things to sell.

But I’m also instinctively uncomfortable with anything that smacks of racial quotas. Yet it is undeniable that law firms, especially big corporate firms, have not done everything they could to diversify. Some of the older troglodytes even seem to believe that the clients may harbor suspicions of minority lawyers.  So it’s nice to see pushback from the clients.

[Original draft 5/13/2005.  As part of my blog redesign, I’ve been going through draft blog posts that somehow never made it to publication. This is one of them.]

2011: Subsequent research by one of my colleagues suggests strongly that big clients, at least, really couldn’t care less about diversity among their lawyers; big firm clients may talk a great deal in public about demanding it, but it doesn’t even show up on their general counsels’ list of important factors determining law firm choice when speaking in private.

Mars Hill College has accepted the resignation of a longtime professor after he challenged students to disrobe in exchange for an A in his sociology class and one of them took him up on the offer.

College President Dan Lunsford said the professor didn’t expect the student would actually take off his clothes during the class last Thursday evening. The instructor’s offer was intended to illustrate cultural differences and that public nudity is unacceptable in American society, he said.

“He did not expect it to happen,” Lunsford said. “The professor realized that this had gone much beyond what he ever anticipated, and he was shocked and dismayed.”

Lunsford said he would not release the name of the professor or student because of privacy concerns. The student will not be punished, he said.

The incident has been the talk of the campus at this Madison County school affiliated with the Baptist Church. Senior Kat Marotta said it disturbed her.

“I feel a lot of the responsibility is on the professor in how he handles his classroom,” she said. “I’m very disappointed.

“People were very upset about it. It’s probably the juiciest thing that’s ever come out of this campus.”

But students such as senior Josh Dye do not believe it was that serious.

“As part of the classroom setting, I don’t think it should have been done, but it really didn’t affect me,” he said.

Lunsford said the professor, who has been with the college for more than 25 years, acted professionally by resigning. He has tenure and is eligible for retirement benefits.

“The professor has requested to activate his retirement, and it has been accepted with my expression of appreciation of his service to the college in the past,” he said. “I am concerned about the negative perception it may generate, and the professor was equally concerned in his conversation with me. However, it was a mistake.”

The professor apologized in an e-mail to students in the class. Lunsford said the student will not be punished because the incident would not have occurred if the teacher hadn’t issued the challenge. However, the student will not receive an A for accepting the offer, he said.

“In my view, in American society and in an academic environment, public nudity is not acceptable to illustrate a point,” he said.

[Original draft 2/21/2004. In preparation for my blog redesign, I found draft blog posts that somehow never made it to publication. This is one of them.]

2010: Link-rot has struck. Here’s the archive.org version. I imagine I didn’t run this because it seemed a little risqué somehow for around here and I felt sorry for the guy. And I suppose the contract is void on public policy grounds?