Posted on September 5, 2016 by Michael Froomkin

Spotted this truck outside the local grocery store.

Note that the feds are doing next to nothing around here because Republicans in Congress blocked the money — they demanded defunding a women’s health program (Planned Parenthood) in exchange for saving babies.

Yes, this election is literally a motherhood issue.

Thanks to an advisory from Commissioner Daniella Levine Cava, I found links to the Miami-Dade Naled spraying schedule and the 10 mile square target district for Naled. Unfortunately there is no info about future spraying, just that Naled was sprayed Aug 4 at 6:16 am (my, that’s precise!); Aug 6, 6:40am; Aug 12, 6 a.m. (that would be…this morning). Here’s the target map (click for larger version). Naled is the larger zone, the smaller zone is a larvacide: 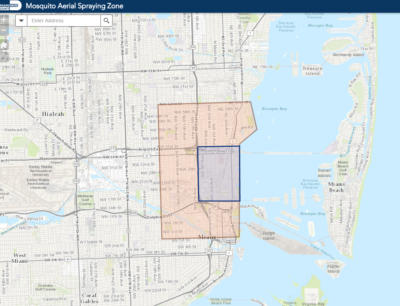 As I said, no word as to when they’ll spray again. Recall that Naled is dangerous.

County Spraying Naled — At the Wrong Time of Day?

Miami-Dade is aerial spraying a pesticide banned in the EU to control potentially Zika-infested mosquitoes:

Vasquez, of the county’s mosquito control unit, also said that while initial spraying had reduced mosquitoes, the number had started to rise again with recent heavy rain. The county plans to conduct eight aerial treatments altogether, four with an insecticide called Naled and four with BTI, an organic larvicide to attack eggs. The area has been divided into sectors, with nine teams doing door-to-door inspections in search of breeding mosquitoes, he said.

— Zika Virus: Count rises in Miami with another case.

There are two problems here. First, Naled was banned by the European Union in 2012 because the risk to humans and to the environment was deemed unacceptable.

The US Air Force also recently sprayed Naled, aka Dibron, in an uspecified wide area around the Homestead Air Force Base (including residential areas) “to improve working conditions and lower the risk of vector-borne illnesses to individuals who work and live at Homestead Air Reserve Base and the surrounding Miami-Dade County.”

There’s also a question of timing. I assume that in general it’s better to do aerial spraying when fewer people are on the street so as not to get the spray on people. (Seems logical, but if any readers are expert in pesticides, please correct me if I’m wrong about that.) But when the Air Force sprayed, it did it in the evening when the mosquitoes are most likely to be flying: “Since it is an aerial spray, most mosquitoes have to be in the air to contact the material, that is why we do it so close to evening when mosquito populations are coming out of their hiding spaces” said Lt. Col. Karl Haagsma, entomologist for 910th Airlift Wing.

In contrast, the Miami-Dade spraying started early in the morning and kept going through rush hour:

On Wednesday, a low-flying plane misted the area with a nontoxic larvicide intended to kill mosquito eggs, Casey said. But a flight that was scheduled to fly at 6:30 a.m. was still flying overhead at 10 a.m., angering business owners already on edge about scaring away customers.

I’m no biologist, but isn’t this the worst of both worlds: spraying when all the humans are up and about, but not the mosquitoes?

No Breeding on Campus

Posted on August 9, 2016 by Michael Froomkin 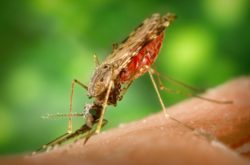 The U sent out Advisory No. 2: Update on Zika Virus and UM Preparedness Actions.  Key bits:

The medical school campus is a mile, if that, from Wynwood, but the Coral Gables campus where I am is about 7.5 miles from the near edge of Wynwood.  U.M. says we’re 10 miles away, but I think that is the driving distance; I suppose mosquitos may take the freeway when they hitch a ride. On my map, ten miles North-East from the law school puts you beyond Little Haiti.

Zika Ground Zero is About 7.5 Miles NE of Here

Posted on August 9, 2016 by Michael Froomkin

(Corrected headline: NE not NW. Not that the mosquitoes care.)