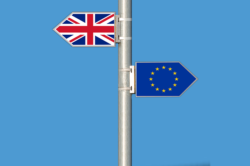 Today is the 5th anniversary of the UK’s decision to pull out the EU. I remain convinced that in the long run this will clearly be seen as one of the dumbest decisions a democracy ever made. Maybe not quite as dumb as electing Donald Trump, but one with much greater long-run consequences.

Meanwhile, however, views on the ground still differ: BoJo is still gung-ho — while many pro-Brexit voters say even if it did hurt them, it was worth it. Analysts and interest groups say it has harmed the UK, including importers, exporters, exporters again, UK expats in the EU, UK TV and filmakers, UK touring bands, pigeon fanciers, you name it; yes it’s all very complicated. Meanwhile the EU view is somewhere between ‘meh‘ and ‘good riddance’, although Timothy Garton Ash argues that the EU is worse off without the UK.  (FWIW, I half agree, but note that the EU also reaped great benefits, in that the disaster in the UK destroyed all the nascent EU separatist movements in other EU members.) Lurking in the future is the unresolved status of Northern Ireland — will it be in the EU economic zone and hence outside the UK (as agreed in the Brexit deal), or outside the EU thus avoiding a border with the rest of the UK…but creating one with the Republic of Ireland in violation of the so-called Good Friday agreement.

For the UK this anniversary also raises the specter of divorce — or divorces: If the UK can’t sort out the Northern Irish trade issue, there’s a chance that re-unification with the Republic might become more popular.  Meanwhile, Scotland likely will have another referendum on independence in the next few years, and the argument that leaving the UK would allow Scotland to rejoin Europe might well carry the day.  In the end all that would be left of the UK would be England and Wales.

This entry was posted in Brexit, Personal. Bookmark the permalink.