Is the ‘Ever Given’ Still Stuck in the Suez Canal?

My co-author (and son) and I will be presenting out paper Fixing the Senate: A User’s Guide at the American Constitution Society’s Constitutional Law Scholars Forum.

The program runs all day, but we’re on in a session at 3pm.

Satanic Concerns at the Monkey Cage

The devils are in the details, and it’s all details.

Spotted in my news feed today:

Fixing the Senate: A User’s Guide 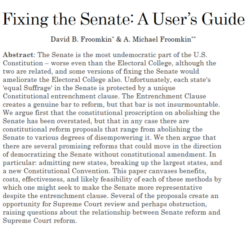 New draft at SSRN, co-authored with David Froomkin who happens to be my son and is a J.D./Ph.D (political theory) candidate at Yale. It’s called Fixing the Senate: A User’s Guide, and here’s the abstract:

The Senate is the most undemocratic part of the U.S. Constitution – worse even than the Electoral College, although the two are related, and some versions of fixing the Senate would ameliorate the Electoral College also. Unfortunately, each state’s ‘equal Suffrage’ in the Senate is protected by a unique Constitutional entrenchment clause. The Entrenchment Clause creates a genuine bar to reform, but that bar is not insurmountable. We argue first that the constitutional proscription on abolishing the Senate has been overstated, but that in any case there are constitutional reform proposals that range from abolishing the Senate to various degrees of disempowering it. We then argue that there are several promising reforms that could move in the direction of democratizing the Senate without constitutional amendment. In particular: admitting new states, breaking up the largest states, and a new Constitutional Convention. This paper canvases benefits, costs, effectiveness, and likely feasibility of each of these methods by which one might seek to make the Senate more representative despite the entrenchment clause. Several of the proposals create an opportunity for Supreme Court review and perhaps obstruction, raising questions about the relationship between Senate reform and Supreme Court reform.

Shout-out to Larry Solumn for giving it the “highly recommended” seal of approval.