This is brilliant, but is it too subtle?

To be honest, when I clicked on it I wasn’t paying full attention, and at first I thought it was a promo for Leonard DeCaprio’s 3-parter on Ulysses S Grant, which is currently running on the History Channel.

Wasn’t till the end, when they named the sponsor, that it hit me.

To be honest, I only read Thomas Friedman’s column if I’m really trying to procrastinate. I lost patience with him back in the “Friedman Unit” days.

But today’s column is a doozy. Maybe the best column he’s ever done. It’s called Mike Pompeo Is the Worst Secretary of State Ever and it’s got two devastating points.

The first one actually goes back to Pomepeo’s days as Director of the C.I.A:  “while Pompeo was C.I.A. director, the first foreign-planned terrorist attack on U.S. soil since 9/11 was being organized here and abroad, and while he was secretary of state it was carried out.”

Hell, if that were me — if the first foreign-planned terrorist attack on American soil since 9/11 developed on my watch and if I had just gotten rid of the State Department inspector general without explanation — I’d also be trying to distract attention.
I mean, if it were me, I might even claim that China concocted the coronavirus in a lab in Wuhan. Wait — that’s what Pompeo did!

The second point is that, Pompeo “has been the worst secretary of state in American history, without a single diplomatic achievement. …. Pompeo’s two most notable accomplishments as secretary of state are, metaphorically speaking, shooting two of his senior State Department officials in the back.”  One was US Ambassador to the Ukraine Marie Yovanovitch . “The other was the department’s inspector general, Steve Linick, whom Pompeo got Trump to fire, reportedly because he was investigating — wait for it now — Pompeo’s own efforts to evade a congressional ban on arms sales to Saudi Arabia and for improperly asking a State Department employee to run errands for him and his wife.”

But read the whole thing.  I think it almost left scortch marks on the breakfast table.

Paid for by the Lindsey Must Go PAC.

Update: If the video above isn’t working for you try this link instead.

You don’t often expect wisdom in the Miami Herald, but here it is, in the Weekend Section no less: 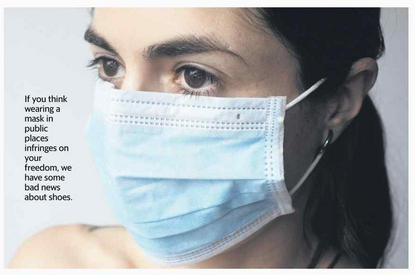 Indeed, where are all the armed demos against the “No Shirt, No Shoes, No Service” signs?

The Earned Income Tax Credit is widely touted as a triumph of intelligent poverty relief.  Now Matt Bruenig suggests this is all wrong.

A bit of background: Suppose you want to give poor people money, but also don’t want to discourage work.  Yet you also don’t want to give money to people once they are earning enough not to be poor.  Imagine a program that provides, say, $6000 benefits up to an arbitrary cut-off, say earnings of $12,760 (the poverty line for a single person) per year.  The reason you don’t want to do that is that a person looking at a raise from $12K to $13K would likely find that the $1K raise actually cost them $5K when you factor in the lost benefits — a major disincentive.

The policy lesson was to do graduated cuts — none at first, so the first marginal extra dollar went right into the working poor pocket, and then on a percentage basis, so the marginal benefit of “working more” (actually, earning more) was always significant net of taxes.  A key feature of the EIC is the benefits are much more generous for persons with children: a key goal of the program has always been to target working single mothers with children.

Thus, as Wikipedia summarizes it,

EITC phases in slowly, has a medium-length plateau, and phases out more slowly than it was phased in. Since the credit phases out at 21% (more than one qualifying child) or 16% (one qualifying child), it is always preferable to have one more dollar of actual salary or wages considering the EITC alone. (Investment income, however, is handled far less gracefully, as one more dollar of income can result in the sudden 100% loss of the entire credit.)

Conventional wisdom, of which on this topic I’ve always been a happy consumer, says that while the EIC leaves behind those with no job at all (a political compromise to exclude the so-called  ‘undeserving poor’), for the population it targets EIC does a great job. And that, as far as know, is what most studies have shown.  Certainly back in the days I took economics EIC was touted as a substantial, if imperfect, success story.

But, comes now a heretic:

In order to determine whether the EITC works the same way in reality as it does on paper, policy researchers have historically relied upon the Annual Social and Economic Supplement (ASEC) microdata produced by the Census. Analyses of the ASEC microdata inevitably reveal that the EITC functions perfectly, pulling around 5.6 million people out of poverty.

But this is a mirage. The reason the EITC functions perfectly in the ASEC microdata is because the EITC values for each family are imputed using a tax simulation that assumes the EITC works perfectly. You cannot evaluate the effectiveness of a program by using data that is constructed by assuming its effectiveness. Yet that is precisely how most evaluations of the EITC are currently done.

If correct, that is a major gotcha.

The conventional figures that are produced through this tax simulation have three big problems that combine to dramatically overstate how many people the EITC pulls out of poverty.

The first problem is that the ASEC data counts EITC benefits in the wrong year. For example, EITC benefits that are actually paid out in early 2019 are counted as if they are received in 2018. This makes the program appear to be perfectly targeted to those with earnings right around the poverty line, even though it is not.

The second problem is that the ASEC data assumes 100 percent of eligible people participate in the program. In reality, according to the IRS, only 78 percent do.

The final problem is that the ASEC data assumes that eligible individuals receive their entire EITC benefit. Yet the IRS says that about 60 percent of EITC recipients use a paid tax preparer, and private surveys have shown that these preparers charge fees that are equal to around 13 to 22 percent of the average EITC benefit.

Adjusting the data to account for these problems reveals that the EITC only reduces poverty by half as much as is commonly reported. These adjustments also reveal that, due to its unique private administrative costs in the form of tax preparation fees, the EITC’s administrative overhead is around 11 percent of benefits received, making it one of the least efficient welfare programs in the country.

This is the one part of the analysis that looks suspect to the uninitiated (this is not my field): how many of the people paying a tax preparation fee would have done so anyway? In other words, is it fair to ascribe to the EIC 100% of the tax preparation fees borne by its beneficiaries or is the marginal cost much less?

Even so, the measurement circularity claim, if valid, seems like a very legitimate beef.  More studies please!