Fresh up on SSRN, a pre-publication draft text of Privacy as Safety, co-authored with Zak Colangelo and forthcoming in the Washington Law Review.  Here’s the abstract and TOC:

The idea that privacy makes you safer is unjustly neglected: public officials emphasize the dangers of privacy while contemporary privacy theorists acknowledge that privacy may have safety implications but hardly dwell on the point. We argue that this lack of emphasis is a substantive and strategic error, and seek to rectify it. This refocusing is particularly timely given the proliferation of new and invasive technologies for the home and for consumer use more generally, not to mention surveillance technologies such as so-called smart cities.

Indeed, we argue—perhaps for the first time in modern conversations about privacy—that in many cases privacy is safety, and that, in practice, United States law already recognizes this fact. Although the connection rarely figures in contemporary conversations about privacy, the relationship is implicitly recognized in a substantial but diverse body of U.S. law that protects privacy as a direct means of protecting safety. As evidence we offer a survey of the ways in which U.S. law already recognizes that privacy is safety, or at least that privacy enhances safety. Following modern reformulations of Alan Westin’s four zones of privacy, we explore the safety-enhancing privacy protections within the personal, intimate, semi-private, and public zones of life, and find examples in each zone, although cases in which privacy protects physical safety seem particularly frequent. We close by noting that new technologies such as the Internet of Things and connected cars create privacy gaps that can endanger their users’ safety, suggesting the need for new safety-enhancing privacy rules in these areas.

By emphasizing the deep connection between privacy and safety, we seek to lay a foundation for planned future work arguing that U.S. administrative agencies with a safety mission should make privacy protection one of their goals. 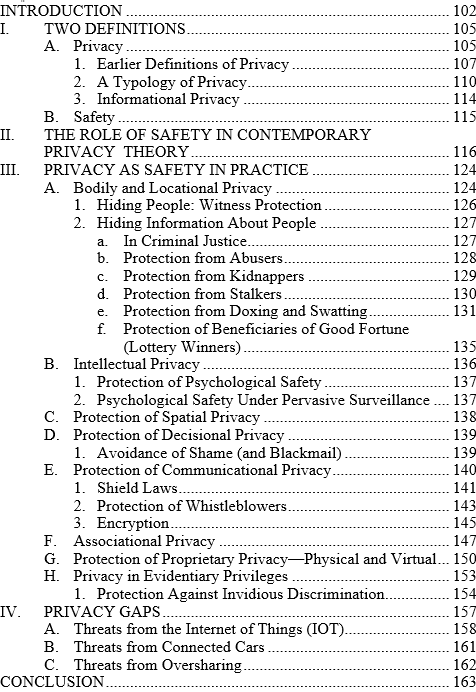 This entry was posted in Law: Privacy, Writings. Bookmark the permalink.