The Pizza Theory of Contemporary Politics

Posted on December 11, 2019 by Michael Froomkin 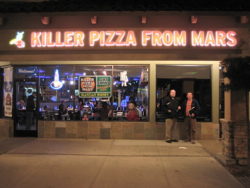 James Grimmelmann explains the state of play in U.S. politics.  (Applies to the UK as well, alas):

This election is like if your friends pick dinner and 3 vote pizza and 2 vote “kill and eat you”. Even if pizza wins, there’s a big problem.
— Andrew Shvarts (@Shvartacus)
August 9, 2016

Living together in this house is impossible, and yet it goes on. You can’t make the talking-lizards guy move out; he has too many friends. (Even if he did, could you ever really trust your other friend who went along with him?) You can’t move out; you have nowhere else to go. The fact of the matter is, dinner – and your life – depend on the person who knows and cares the least about either.

(There’s more where that came from.)

This entry was posted in Politics. Bookmark the permalink.

1 Response to The Pizza Theory of Contemporary Politics