Big Win for EFF and Everyone 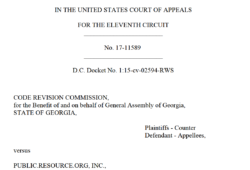 The 11th Circuit ruled on Friday that law, and critical annotations to it, cannot be copyrighted. This bit is particularly good:

The general rule that legislative codifications are uncopyrightable derives from an understanding of the nature of law and the basic idea that the People, as the reservoir of all sovereignty, are the source of our law. For purposes of the Copyright Act, this means that the People are the constructive authors of those official legal promulgations of government that represent an exercise of sovereign authority. And because they are the authors, the People are the owners of these works, meaning that the works are intrinsically public domain material and, therefore, uncopyrightable.

The Electronic Frontier Foundation, of which I’m an Advisory Board member, represented Public.Resource.Org and continues to represent them in their ongoing struggle to open access to privately drafted standards incorporated by reference in statutes and regulations.

A. Michael Froomkin is the Laurie Silvers & Mitchell Rubenstein Distinguished Professor of Law at the University of Miami in Coral Gables, Florida. Recent work on technology law includes articles on AI and medicine, on drones, and many articles about law and the Internet, and on technology and privacy. He is the founder and editor of the online law review Jotwell, The Journal of Things We Like (Lots). He is a founder (2012) and sometime Chair of the We Robot conference, which returns to Coral Gables in 2019. He is on the Advisory Boards of several organizations including the Electronic Frontier Foundation and the Electronic Privacy Information Center. Prof. Froomkin is a non-resident Fellow of the Yale Law School Information Society Project and a member of the Royal Institute of International Affairs in London, of the University of Miami Center for Computational Science. Professor Froomkin’s publications are listed at http://law.tm/#pubs. Before entering teaching, Prof. Froomkin practiced international arbitration law in the London office of Wilmer, Cutler & Pickering. He clerked for Judge Stephen F. Williams of the U.S. Court of Appeals, D.C. Circuit, and Chief Judge John F. Grady of the U.S. District Court, Northern District of Illinois. Prof. Froomkin received his J.D. from Yale Law School, where he served as Articles Editor of both the Yale Law Journal and the Yale Journal of International Law. He has an M.Phil in History of International Relations from Cambridge University in England, which he obtained while on a Mellon Fellowship. His B.A. from Yale was in Economics and History, summa cum laude, phi beta kappa with Distinction in History.
View all posts by Michael Froomkin →
This entry was posted in Law: IP. Bookmark the permalink.