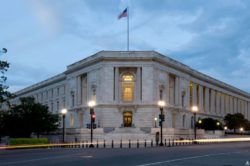 I am far from being Chuck Schumer’s greatest fan, but I have to hand it to him for his masterful trolling of Senate Republicans this week. By suggesting that the Russel Office Building be renamed for the now late Senator McCain, Sen. Schumer threatens Republicans with a vote that would be a Hobson’s choice: either they vote for McCain, who not only will be said to represent the virtues they have left behind but will also be a vote that enrages their Maximum Leader. Or, they can vote for the segregationist, Richard Russell, a Georgia Democrat who led opposition to civil rights legislation.

It’s beautiful: vote for the anti-Trump or for the Democratic segregationist. No wonder Senate Majority Leader Mitch McConnell wants to bury the suggestion under delaying tactics.

This entry was posted in Uncategorized. Bookmark the permalink.