Comey and the Chain of Command 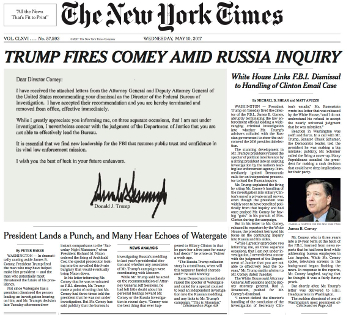 Former FBI Director James Comey’s written testimony for tomorrow’s hearing is out. No new revelations as such, but the overall tone is is very striking.

One other interesting aspect is Comey’s relationships with his bosses. On Feb. 14 Comey did not share his concerns with his bosses, although he did share them with senior FBI officials:

The FBI leadership team agreed with me that it was important not to infect the investigative team with the President’s request, which we did not intend to abide. We also concluded that, given that it was a one-on-one conversation, there was nothing available to corroborate my account. We concluded it made little sense to report it to Attorney General Sessions, who we expected would likely recuse himself from involvement in Russia – related investigations. (He did so two weeks later.) The Deputy Attorney General’s role was then filled in an acting capacity by a United States Attorney, who would also not be long in the role.

Nevertheless, a few days later Comey asked AG Sessions to run interference for him against the President, but Sessions didn’t:

I took the opportunity to implore the Attorney General to prevent any future direct communication between the President and me. I told the AG that what had just happened – him being asked to leave while the FBI Director, who reports to the AG, remained behind – was inappropriate and should never happen. He did not reply.

On March 30, Comey called the acting AG to pass the buck–it didn’t work:

I called Acting Deputy Attorney General Dana Boente (AG Sessions had by then recused himself on all Russia – related matters), to report the substance of the call from the President, and said I would await his guidance. I did not hear back from him before the President called me again two weeks later.

What do we learn from this?

First that Comey briefed his bosses when it suited him, and kept them in the dark when he made a political judgement that there was no percentage in having them in the loop.

Second, that at least regarding the Valentine’s Day meeting with Trump, Comey was talking to the wrong higher-ups. If Comey was really afraid of being left alone in a room with Trump, he should have talked to Vice President Pence, the one man in the administration who understands the dangers of one-on-one meetings.

1 Response to Comey and the Chain of Command